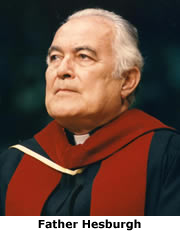 The National Association of Independent Colleges and Universities (NAICU) has selected Rev. Theodore M. Hesburgh, C.S.C., president emeritus of the University of Notre Dame, as the 2008 recipient of the Henry Paley Memorial Award.

Since 1985, the Paley Award has recognized an individual who, throughout his or her career, has unfailingly served the students and faculty of independent higher education.The recipient of the award has set an example for all who would seek to advance educational opportunity in the United States.The Paley Award is named for Henry Paley, president of the Commission on Independent Colleges and Universities of New York from 1975 until 1984.

One of the most influential figures in higher education in the 20th century, Father Hesburgh served as Notre Dames president from 1952 to 1987, during which time he established the University as one of the nations leading institutions of higher learning. The two major changes during his tenure were the transference of governance in 1967 from the Congregation of Holy Cross to a two-tiered, mixed board of lay and religious trustees and fellows, and the admission of women to undergraduate studies in 1972.

Father Hesburghs service to the nation and Churchincluding 16 presidential appointments and service to four popeshas been recognized with the Medal of Freedom from President Johnson in 1964 and the Congressional Gold Medal in 2000. He is the recipient of 150 honorary degreesthe most ever awarded to one person.

Father Hesburghs gift for constructing a world-changing vision and bringing it to fruition has inspired all of us in higher education, as well as countless others outside of the halls of academe,Warren said.The NAICU is privileged to award him the 22nd annual Henry Paley Award.