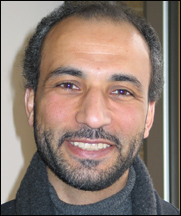 A Muslim scholar who will be joining the University of Notre Dame faculty has been named by Time Magazine as one of the world’s 100 most influential people.p. Tariq Ramadan is among the “Scientists and Thinkers” listed in the magazine’s special April 26 edition. Starting this fall, Ramadan will be the Luce Professor of Religion, Conflict and Peacebuilding in the Joan B. Kroc Institute for International Peace Studies.p. Within the past five years, Ramadan has become highly influential among Muslims throughout Europe, according to Time. “He calls for believers to embrace and practice Islam in a thoroughly modern manner. And he advises Muslims on how they can fully integrate into European societies without betraying the universal laws and values of Islam. A successful author, he sells around 50,000 audio-cassettes of his speeches each year in France alone.”p. The magazine notes that Ramadan is controversial, having been accused of “doublespeak” and for his criticism of “Jewish French intellectual” reaction to the Palestinian intifada, or uprising against Israel. Scott Appleby, John M. Regan Jr. Director of the Kroc Institute, said the accusations are unfounded.p. Ramadan addresses issues that evoke strong feelings because they touch the heart of personal and communal identity, Appleby said. But, he added, controversy cannot and should not be avoided in a place that examines the challenges to international peace.p. “The Kroc Institute seeks to develop alternatives to violent conflict, and we are committed therefore to engaging a variety of influential voices and perspectives in the debate over the role of religion and religious leaders in the development of tolerant and progressive societies,” Appleby said. “Professor Ramadan is but one of many such voices we are inviting to the conversation, and we are delighted that he has been able to gain a hearing within traditional Islamic communities as well as in secularizing societies.”p. As the Henry R. Luce Professor of Religion, Conflict and Peacebuilding, Ramadan will direct the Kroc Institute’s program of research, teaching and outreach in intra-religious and inter-religious dialogue and religious peacebuilding. The Luce professorship is funded by the Henry Luce Foundation. It is a full-time, tenured position.p. Ramadan is uniquely qualified to lead such a program, Appleby said, in that his career has been devoted to bringing together in dialogue divided and contentious voices within Islam. In addition, Ramadan engages Christian, Jewish and secular intellectuals and political leaders in dialogue on some of the most highly charged issues facing the world, Appleby said.p. Ramadan’s most recent book isWestern Muslims and the Future of Islam(Oxford University Press, 2003). He most recently taught at theUniversity of Fribourg.p. Contact: Julie Titone, director of communications, Joan B. Kroc Institute for International Peace Studies, Titone.1@nd.edu