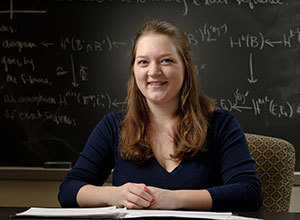 The Winston Churchill Foundation of the United States has selected University of Notre Dame senior MurphyKate Montee as a Churchill Scholar for the 2013-14 academic year. She will use the scholarship to study at the University of Cambridge in the United Kingdom for her master of advanced studies (part III) in theoretical mathematics with a focus on geometry and topology.

The Churchill Scholarship will cover the majority of Montee’s expenses at Cambridge, including tuition and fees, a living allowance, and transportation to and from the United Kingdom.

Montee has participated in two Research Experience for Undergraduates (REU) programs during her summers, which included studying polynomials of recursive ribbon graphs at Louisiana State University and studying knot theory at Williams College. She is also a member of the Seminar for Undergraduate Mathematical Research (SUMR), a program designed for the most talented mathematics students at Notre Dame. She is currently completing an honors thesis, titled “On the Construction of Chern Classes of Complex Vector Bundles.”

In addition to excelling in mathematics, Montee also has a passion for music. She sang the lead mezzo-soprano role in Sondheim’s “Sweeney Todd” at Notre Dame this year and will be the lead soprano in this year’s production of Poulenc’s “Dialogues des Carmelites.”

After completing her year at Cambridge, Montee plans to pursue doctoral studies in mathematics at a university in the United States.

Montee’s Churchill Scholarship was made possible in part through her participation in Notre Dame’s Center for Undergraduate Scholarly Engagement (CUSE). CUSE provides undergraduate students in all the University’s colleges opportunities for research, scholarship, and creative projects. The center also assists them in finding faculty mentors, funding and venues for the publication or presentation of their work, and promotes applications to national Fellowship programs and prepares them in their application process.

More information on CUSE is available online at cuse.nd.edu.