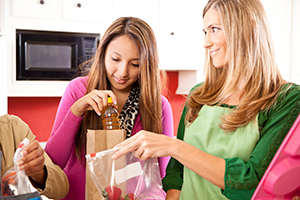 How should a concerned mother discuss issues of diet and weight with her daughter? Very carefully, according to Erin Hillard, a developmental psychology doctoral student at the University of Notre Dame.

In an article recently published in the journal Body Image, Hillard and her colleagues, fellow Notre Dame psychology graduate student Rebecca A. Morrissey, and Notre Dame faculty members Dawn M. Gondoli, associate professor of psychology, and Alexandra F. Corning, research associate professor of psychology, reported on results from their study of a representative group of sixth- through eighth-grade girls and their mothers.

Hillard acknowledged that the study findings as a whole suggested more about what mothers should not be talking about than what they should. “After all,” she said, “the best outcomes were found for daughters whose mothers were not engaging in either type of conversation. They do shed light on the complexity of the issue of talking to children about their weight in ways that don’t lead to poor health outcomes in the long run.”