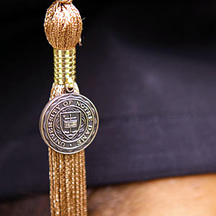 More than 2,900 students received degrees Sunday (May 15) at the University of Notre Dames 160th Commencement exercises, which were held in the Joyce Center on campus.

Vartan Gregorian, president of the Carnegie Corporation and former president of Brown University, was the principal speaker and the recipient of an honorary doctor of laws degree. Dr. Joseph E. Murray, the Nobel laureate who performed the first successful organ transplant 51 years ago, received the 2005 Laetare Medal, the most prestigious award given to American Catholics.