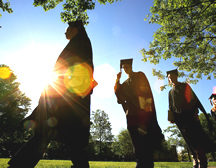 More than 2,800 students will receive degrees Sunday (May 20) at the University of Notre Dames 162 nd Commencement exercises, which will be held at 2 p.m. in theJoyceCenteron campus. **

Jeffrey R. Immelt, chairman and chief executive officer of General Electric Co., will be the principal speaker and the recipient of an honorary doctor of engineering degree. Patrick F. McCartan, chair of the Universitys Board of Trustees, will receive the 2007 Laetare Medal, Notre Dame’s highest honor and the most prestigious award given to American Catholics.

Michael Rossmann, a double major in theology and economics fromIowa City,Iowa, will deliver the valedictory address.

Degrees will be conferred on 1,963 undergraduates, 408 masters degree students in the Mendoza College of Business, and 203Notre DameLawSchoolstudents.

An additional 303 students will receive masters and doctoral degrees at the first Commencement ceremony for the UniversitysGraduateSchool, which will be held Saturday (May 19) at 1 p.m. in theDeBartoloCenterfor the Performing Arts.UniversityofMichigan President Mary Sue Colemanwill deliver the principal address and will receive an honorary doctor of science degree at the following days ceremony.