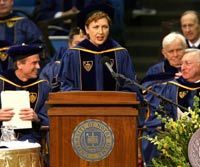 There went the Irish.

The President of Ireland, Mary McAleese, left 2,800 graduates, their families and faculty members with a deepened sense of the spirit of the Irishif not an appreciation for the Irish wit and way with wordsduring the University of Notre Dames 161st Commencement exercises Sunday.

McAleeses 30-minute address ( /content.cfm?topicid=17702 )wove connections among the history of Ireland, the experience of Irish immigrants to the U.S. and the parallels of leadership that have made both Ireland and Notre Dame strong. None the least of those qualities was a deep appreciation for education, she said.

Following the valedictory address by Catherine Distler, Provost Thomas Burish pointed out that some graduates already have developed those voices.

Distlers address ( /content.cfm?topicid=17662 ) drew from her work with the destitute and sick of Calcutta, India, as co-organizer of such Notre Dame activities as Notre Dame’s World AIDS Day Campaign, but also from the simple act of reading the Sunday newspaper, or from the words of Irish poet Brendan Kennelly, who urged,If you want to serve the age, betray it.

If we lack the courage to call the world out on its arrogance, injustice, and shortcomingsif we are not brave enough to point out how the world could be better, then the world will never change. But if we engage the world so as to learn its secrets and then betray a flawed today for the hope of a better tomorrow, our impact will have profound potential.

McAleese said her special memories of this Commencement would include sharing a luncheon table with Laetare Medalist Dave Brubeck. The same would have to be said for the members of the Notre Dame Concert Band, whose music annually opens and closes the ceremony.

As soon as I heard them,Brubeck said of the band,I thought Why didnt I bring the music I wrote for the Pope that was really for 21 brass?These guys could really cut that.

In 1987, he was pressed to create nine minutes of music for Pope John Paul IIs Mass in Candlestick Park that had to be heard over the voices of the 72,000 in attendance. Only brass could carry over their voices.Someday Id like to hear it here. It belongs here.

Brubeck then delivereda speech unlike any others,as Burish would call it.You people are going out in the world, and you need a piece called TravelinBlues,said Brubeck, as he brought down the house not with words but with the short but swinging piano piece.

This Commencement was the first for Burish and for Rev. John I. Jenkins, C.S.C., president, both who assumed their new posts in the academic year that is ending.

Recalling the highlights of his presidential freshman year, Father Jenkins said,No experience has been more gratifying to me than to travel around the country speaking to employers colleagues, fellow members of the community, parish priests, who say how much graduates of Notre Dame contribute, what they bring to their work and their community, how generous they are in service, how they reflect knowledge and a high degree of confidence, but a moral purpose in their lives.

The presentations of honorary degrees included a standing ovation for Gilburt Loescher, former Notre Dame political scientist and human rights activitist. Pulitzer Prize-winner Harper Lee, author ofTo Kill a Mockingbird,was astonished but delighted when, upon being called to be hooded, almost every graduate stood up and held up a paperback copy of her great work.