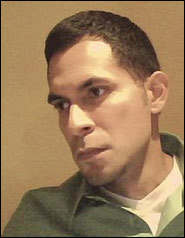 Paul Martínez Pompa, a faculty member in the English department at Triton College in River Grove, Ill., is the 2008 recipient of the Andrés Montoya Poetry Prize given by Letras Latinas, the literary program of the University of Notre Dames Institute for Latino Studies (ILS).

A collaboration with Notre Dame Press, the prize supports the publication of a first book by a Latino or Latina poet and is awarded every other year.Martínez Pompa was honored for his manuscriptMen Watching Men.

The poems of Paul Martínez Pompa are gritty and visceral, but never cross the line into sensationalism,said final judge Martín Espada, Pulitzer Prize finalist and renowned poet.They are poems that vividly evoke the urban world, especially Chicago, without ever lapsing into urban cliché.They are poems that seek justice for the Latino community without ever resorting to the overheated language that all too often consigns poetry of social conscience to oblivion.

Coordinated by Letras Latinas director Francisco Aragón, the prize honors the late Andrés Montoya, author of the award-winning collectionThe Ice Worker Sings.Montoya was the son of the acclaimed Chicano artist Malaquias Montoya, who was one of the first ILS fellows.Previous winners of the Montoya Prize are Gabriel Gomez and Sheryl Luna.

Letras Latinas seeks to enhance the visibility, appreciation and study of Latino literature both on and off the Notre Dame campus and is particularly interested in projects that identify and support emerging Latino and Latina writers.