“I don’t want you to be alarmed, but we’ve spotted an abnormality with his heart,” the doctor said. “It’s not in the right place.”

In May, Tuan Ngo and his wife Kelsey will celebrate a very special first Mother’s Day with 4-month-old Tuanny, their miracle baby.
Last summer, Tuan, an IT support consultant for the Office of Public Affairs and Communications in Grace Hall and the offices in the Main Building, received heartbreaking news after a routine ultrasound.

“I don’t want you to be alarmed, but we’ve spotted an abnormality with his heart,” the doctor said. “It’s not in the right place.”

They were referred to the Center for High Risk Pregnancy/Maternal Fetal Medicine at St. Joseph Regional Medical Center, where another doctor told them, “Your baby boy has CDH.”

What was CDH? They’d never heard of it. 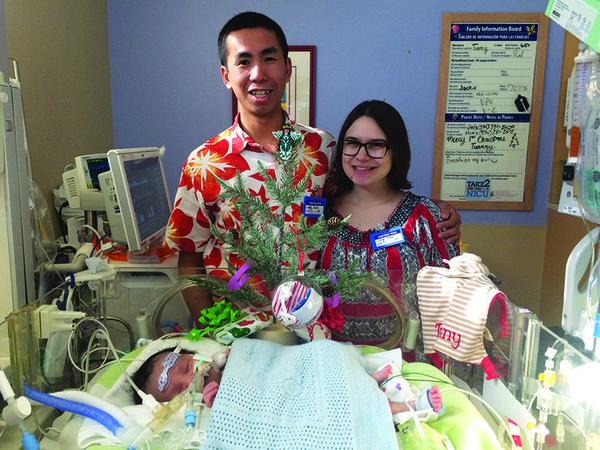 Their tiny baby had a congenital diaphragmatic hernia (CDH), or a hole in the diaphragm — the muscle that separates the chest and abdominal cavities. The hole allows organs from the abdomen to move into the chest cavity, taking up space and preventing the lungs from growing to normal size.

The National Institutes of Health estimates the incidence of the birth defect at less then 5 per 10,000 live births, with a survival rate of around 50 percent. Tuanny’s CDH was on the severe end of the spectrum, leaving him with only an estimated 10 percent chance of survival.

Devastated, the couple turned to support groups on the internet and Facebook to try to find answers and figure out how to cope with the life-changing news. They found options for doctors, but entering their care meant spending two to six months at hospitals outside of Indiana.
In the midst of the personal stress of the news, Tuan couldn’t help but think of what six months away from South Bend would mean for his job.

Conversations with his manager, Ryan Palmer, and HR consultant Lori Maurer helped him focus on the most important thing to worry about — his family.

“Everybody was very supportive and reassuring and they told me, ‘Look, this is an extreme circumstance and we’ll make sure that everything is worked out on our end. Don’t worry about being able to support your family while you’re seeking medical care,’” Tuan recalls. “The Notre Dame family is not going to leave you. Focus on taking care of your baby.” 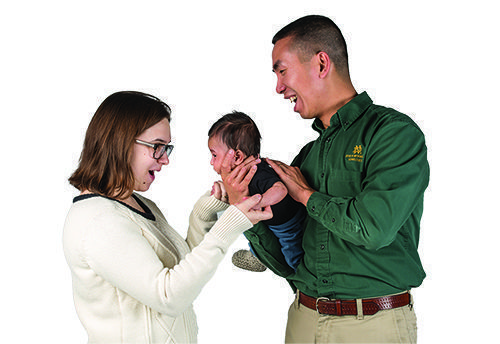 The University offers four weeks of 100-percent-paid parental leave. Coupled with vacation time and time available under the Family and Medical Leave Act, Tuan’s time out of the office was covered.

Just before Tuan and Kelsey set out for St. Petersburg, Florida, and the care of Dr. David Kays at the Johns Hopkins All Children’s Hospital,  *Rev. Jim Bracke, C.S.C.,* the University’s staff chaplain, offered a Mass for the family in the chapel of Dunne Hall.

“It was very touching to us to see not just my OPAC friends, but also people from Office of General Counsel, the Office of Continuous Improvement, the President’s Office, the Executive Vice President’s Office, undergraduate admissions, HR, my OIT family — all these different departments that I have a contact with were represented,” Tuan says. “To see that chapel filled with the Notre Dame family showed us that there were people who cared deeply for us in our time of need. That emotional and spiritual support made a lot of difference in our journey.”

The couple left for St. Petersburg on the 21st of November, when Kelsey was 37 weeks pregnant. Baby Tuanny was born on December 14, with a team of doctors standing by to cut the cord. “They wheeled him past Kelsey’s hospital bed so she could touch him just for a few seconds. Then they rushed him to the ICU.” He was baptized there a few hours after his birth.

Shortly before Tuanny was born, an MRI showed that his CDH had improved, something doctors couldn’t explain. After his birth, one of his lungs grew from the size of his clavicle to eight or nine ribs in length. Although he has only 1 1/2 lungs, something that may impact him later, his prognosis to lead a normal life is good.

“We will always hold in our heart that because there were so many people praying and offering Masses, it was divine intervention,” Tuan says. “The graces received from prayers did nothing but aid him in recovery.”

Says Tuan, “As touching as it was to see everyone at that Mass on campus, the thing that really warmed our hearts and kept us going was that when we were in Florida we kept getting get-well cards from the Notre Dame family,” he says. “It reminded us that we weren’t alone in this trial, that although there were many people who couldn’t be there for us physically, they were still thinking of us and praying for us. We were not on our own.”

One of the most touching notes came from University President Rev. John I. Jenkins, C.S.C. The card included a rosary for the baby and a holy card saying that Father Jenkins would be saying a Mass for Tuanny.

“It was extremely moving to know that the president of the University, who is extremely busy running one of the largest Catholic universities, would take time out of his busy schedule to write a card, give Tuanny a rosary, and offer the most beneficial form of prayers for our son,” Tuan says.

For more information on Tuanny and CDH, visit Tuan’s Facebook page, Tuanny the Tiny Warrior and his CDH Journey.