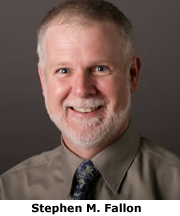 Stephen M. Fallon, professor of liberal studies and English at the University of Notre Dame, is co-editor ofThe Complete Poetry and Essential Prose of John Milton,a new book that celebrates the genius of the 17th century English poet and is expected to become the standard Milton text for the classroom and for general readers.

Published this month by Modern Library, the book contains all of Miltons verse, from the great epicParadise Lostto shorter works such asNativity Ode,Lycidas,A Masque,andSamson Agonistes.Prose selections include letters; controversial works on freedom of the press, marriage and divorce, and republican politics; and a generous portion ofChristian Doctrine,an unorthodox theological treatise.

Fallon and co-editors William Kerrigan and John Rumrich are credited with preserving the vibrant energy of Miltons verse and prose, while making the relatively unfamiliar aspects of his writing accessible to modern readers.Notes illuminate historical contexts, identify classical and biblical allusions, and offer concise accounts of Miltons philosophical and political assumptions.

Leo Damrosch, the Ernest Bernbaum Professor of Literature at Harvard University, says that thissuperb editionwill surely be the edition of choice for teachers, students and general readers, too.

The editors display a remarkable combination of scholarly rigor and sensitivity to literary values, expressed in prose of exemplary clarity and extraordinary grace,said Edward W. Tayler, Lionel Trilling Professor in the Humanities Emeritus of Columbia University.Even the notes, concise as well as precise, approach a kind of epigrammatic brilliancea superb edition.

A scholar of Milton and early modern literature and intellectual history, Fallon also is the author ofMiltons Peculiar Grace: Self-Representation and AuthorityandMilton Among the Philosophers: Poetry and Materialism in Seventeenth-Century England.

A member of the editorial board of the Yale Milton Encyclopedia, Fallon twice has been a National Endowment for the Humanities fellow, as well as a fellow of the Woodrow Wilson Foundation.He co-founded and continues to teach a course on literary and philosophical classics at South Bends Center for the Homeless.