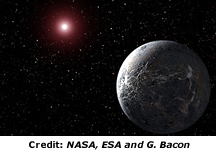 David Bennett, a University of Notre Dame astrophysicist, is a member of an international team of astronomers that has discovered a potentially rocky, icy body that may be the smallest and coolest extrasolar planet yet found.

The discovery was made using a technique calledgravitational microlensing,which may be an exceptional technology for finding distant planets with traits that could support life.

The planet, officially known asOGLE-2005-BLG-390Lb,is located more than 20,000 light years away in the constellation Sagittarius, close to the center of our Milky Way galaxy. It orbits a red star five times less massive than our sun about once every 10 years and has a likely surface temperature of -364 degrees Fahrenheit (-200 degrees Celsius). Although it has a thin atmosphere, like the Earth, the planets rocky surface is probably deeply buried beneath frozen oceans.

Researchers doubt that the cold body could sustain organisms, but believe that gravitational microlensing will present opportunities for observing other rocky planets in thehabitable zonesof stars, where temperatures are perfect for maintaining liquid water and spawning life.

An OGLE (Optical Gravitational Lensing Experiment) project telescope discovered the lensing event onJuly 11, 2005. In an attempt to catch microlensing events as they occur, OGLE scans most of the central Milky Way each night, discovering more than 500 microlensing events each year. To detect the signature of low-mass planets, astronomers must observe these events much more frequently than once per night. OGLE, with only a single telescope, cannot do so without compromising the event discovery rate.

When the July 11 event emerged, the OGLE Early Warning System alerted fellow astronomers across the globe to OGLE-2005-BLG-390 (BLG for galactic bulge, 390 for the 390 th such event discovered by OGLE in 2005). PLANET (Probing Lensing Anomalies NETWork) and RoboNet telescopes collect observations more frequently in an attempt to detect the micolensing signature of planets. PLANET and RoboNet tracked the July 11 event to completion, providing the data that confirmed the presence of a planet.

When two stars are perfectly aligned as seen from Earth, the gravitational field of the foreground star acts as a lens to magnify the background star. Astronomers dont see the planet or the star that it is orbiting, but the effect of their gravity reveals the existence of the planet around the lens star.

Of the more than 150 planets discovered to date, almost all were discovered using the radial velocity method. While incredibly effective, existing technology using radial velocity can only find large, Jupiter-like planets or smaller planets that orbit too close to the their host stars to sustain life.

This new discovery provides a strong hint that low-mass planets may be more common than Jupiters,Bennett said.Microlensing should have discovered dozens of Jupiters by now if they were as common as these Earth-mass planets.

Because OGLE-BLG-390Lb is only the third planet detected using gravitational microlensing and because the method has already revealed a small, rocky body, the researchers believe that there is a strong probability that rocky planets may be even more common than gas-giant ones. This lends support to core accretion, one of the models for solar system formation, which suggests that small, rocky planets should be far more common than massive gaseous planets.

A paper describing the discovery appears in Jan. 26 issue of the journal Nature.