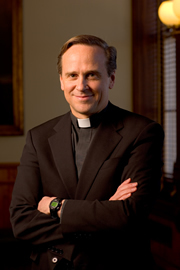 The Michiana community will officially welcome Rev. John I. Jenkins, C.S.C., as the 17 th president of the University of Notre Dame during a reception Sept. 7 (Wednesday) from3:30to5 p.m.at the HealthWorks KidsMuseum in the Memorial Leighton Healthplex,111 W. Jefferson St.,South Bend.

Father Jenkins, 51, who assumed the presidency July 1, had served as president-elect since his election last April, by the Board of Trustees to a five-year term. He will be formally inaugurated during ceremonies Sept. 22 and 23. He is just the third Notre Dame president in 53 years, following Rev. Edward A. Malloy, C.S.C., who served for the past 18 years, and Rev. Theodore M. Hesburgh, C.S.C., who led the University for 35 years, from 1952 to 1987.

Concurrent with assuming the presidency, Father Jenkins was promoted from associate to full professor of philosophy, based upon a recommendation by Notre Dames former Provost, Nathan O. Hatch, with the approval of the Board.

A member of Notre Dames philosophy faculty since 1990, Father Jenkins hadserved from July 2000 until his election as president as a vice president and associate provost at the University.

Prior to his service in the Provosts Office, Father Jenkins had been religioussuperior of the Holy Cross priests and brothers at Notre Dame for three years. As religious superior, he was a Fellow and Trustee of the University, but he relinquished those posts to assume his duties in the provost’s office.

Father Jenkins specializes in the areas of ancient philosophy, medieval philosophy and the philosophy of religion. He is the author ofKnowledge and Faith in Thomas Aquinas,published in 1997 by Cambridge University Press.

The reception is being organized by community leaders in conjunction with Notre Dames Office of Community Relations.