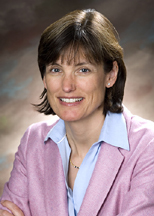 Ann Weber, executive director of medicinal chemistry at Merck Research Laboratories, will deliver a lecture titledDesign and Synthesis of Selective DPP-4 Inhibitors: Discovery of Januvia,a New Treatment for Type 2 Diabetesat 11 a.m. Thursday (April 10) in room 123 of the University of Notre Dames Nieuwland Science Hall. Webers lecture is part of the Organic Seminar series sponsored by the Department of Chemistry and is free and open to the public.

Weber led a cross-functional team of chemists and biologists that created the diabetes pill Januvia, a leading drug that was the first in its class to come to market. The drug, which was approved by the United States Food and Drug Administration in 2006, helps diabetics control their blood-sugar levels by enhancing the body’s ability to produce its own insulin.

Weber is co-inventor on 23 US patents, the author or co-author of more than 55 publications and has 14 patents pending. Her research team won the 2007 Prix Galien USA award for their work on Januvia. In 2007, she received the Merck Directors Award as well as the 2007 Thomas Alva Edison Patent Award. She was named a MerckMost Amazing Womanin 2006.

Webers research interests include the design and synthesis of ligands for G-protein coupled receptors, ion channels and enzymes. In addition to her work on diabetes, she has worked in the area of obesity research where her group identified a ß3-adrenergic receptor agonist that was used for key proof of concept studies in the clinic, demonstrating that stimulation of this target did not induce weight loss in humans.

Weber was graduated from Notre Dame with a bachelors degree in chemistry in 1982. She earned a doctorate in organic chemistry from Harvard in 1987 and accepted a senior research position at Merck Research Laboratories that same year.