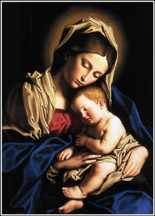 A Mass marking the 150th anniversary of the apparition of Mary at Lourdes will be celebrated at 5:15 p.m. Feb.11 (Monday) in the University of Notre Dames Basilica of the Sacred Heart.

Rev. Theodore M. Hesburgh, C.S.C., president emeritus of Notre Dame, will preside at the Mass, which will be followed by a reception in the Coleman-Morse Centers Hammes Student Lounge.

Preceding the Mass, special prayer services will be held in the Basilica at 6:15 p.m. Thursday, Friday and Saturday (Feb.7 to 9).The services will include an opening prayer, a scriptural reading and the recitation of the rosary.

The first of the 18 reported apparitions of Mary to the 14-year-old St. Bernadette Soubiroux took place Feb. 11, 1858 in a cranny of Massabielle Rock near Lourdes, France.St. Bernadette, scavenging for firewood with her sister and a friend, reported seeing a young and beautiful woman who summoned her again and again to the site.During one apparition, a hitherto hidden spring began to flow from beneath Massabielle, and reports began to circulate of miraculous cures experienced by people who drank from and bathed in its waters.During another, the woman identified herself to the largely illiterate St. Bernadette asthe Immaculate Conception.

Skeptical at first, Church authorities eventually assured the pilgrims who had begun to flock to Lourdes that they werejustified in believing the reality of the apparitionand a large church was built on the site as the devotion became nationally and internationally famous.