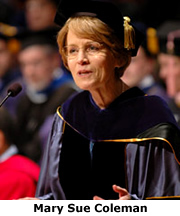 Its not every day that someone fromMichiganis applauded at Notre Dame!

I want to thank Father Jenkins and the leadership of the university for inviting me to be part of such a special day in the life of Notre Dame.The entire country knows of the great football rivalry between our universities, and it is a pleasure to be here at the end of the academic year to focus on what truly is important in higher education – our students.

Graduates, I know its been hard work.The pride, the satisfaction and, yes, the relief you feel are richly deserved.

You thought this day was never going to arrive, and at the same time, it probably feels like you just began your graduate work.

Of course, you leave here a very different person than the new graduate student you were not so long ago.You have acquired not only your degree, but an entire new set of skills to complement your scholarly talents.

If you are preparing for upcoming job interviews or are still polishing your resumes, I hope you take full stock of your attributes.You may leave here as a Ph.D. in engineering or an MFA in creative writing, because you have many other qualities:

You are a financial analyst.You are an expert on cheap meals, inexpensive housing, and stretching a grant.

You are a marketing manager.Selling yourself and packaging your ideas have been paramount.

You are a counselor, providing insight and consolation to friends wrestling with the eternal dilemmas of a graduate student: Why am I doing this? Am I crazy? Will I ever finish?

You are a competitor, fighting for fellowships, lab space, and post-docs.And, like any contender, you have tasted both success and failure.

And you are a performer, staring down stage fright and drawing upon your strongest dramatic talents in defending your thesis or dissertation.

Today, finally, is your well-earned curtain call.And you deserve to take a bow, because you, Notre Dames graduate students of 2007, are a unique class.

When Father Jenkins extended his offer to address you today, he emphasized that Notre Dame is pushing itself to expand and improve upon research and graduate programs.This is a noble effort for Notre Dame, and a needed effort for our nation.Society is hungry for talented scientists, engineers, humanists, architects and social scientists, and is looking to our best universities for answers and solutions to the challenges that face us.

That Notre Dame is taking a hard look at where it stands with research and graduate education – and where it wants to go as a great university of the 21 st century – bodes very well for all of us.I applaud you as students who are about to become alumni, as well as the faculty and administration, for dedicating yourselves to more science, more research and more technologies to improve our world.

Todays challenges are incredibly complex, and require the creativity and expertise of many great minds.Our universities and our alumni excel at creating solutions for tomorrow, and you are now an integral part of this critical undertaking.

Graduate education and research-intensive programs are important, demanding work – for the student, the teacher and the administrator.One of my predecessors atMichiganknew this all too well.

In 1851, a scholar named Henry Philip Tappan produced a book that would become the blueprint for graduate education atMichiganand elsewhere.At the time, he was a professor inNew York City, and still a year away from becomingMichigans first president.

Rather, he wanted institutions of higher learning that would inspire __ students to pursue the life of the mind, so that those students, in turn, would improve and invigorate the world around them.

Henry Tappan wanted an American university where students were given the independence to pursue their studies.He believed a university should be a repository for all knowledge, with museums and libraries and laboratories.

He said:This conception of education is not that of merely teaching men a trade, an art, or a profession; but that of quickening and informing souls with truths and knowledges and giving them the power of using all their faculties aright in whatever direction they choose to exert them.

For promoting this grand vision, President Tappan was roundly castigated byMichigannewspapers.They didnt like that he was fromNew York.They didnt like his fancy ideas.And they didnt want tax dollars being used for such folly.

Another journalist said the youngUniversityofMichiganwas doing just fine in its current state, thank you very much.If Mr. Tappan is not satisfied with that, the sooner he leaves these diggins,the better.

And yet another account characterized Dr. Tappan as, Im afraid to say,a thorough and unmitigated ass. __

Its never easy being a university president. __

You, the holders of masters and doctoral degrees, are what Henry Philip Tappan wanted to see, and what caused such apoplexy among the Fourth Estate.You are, to paraphrase that boorish editor, a thorough and unmitigated success.

Listen again to Henry Tappan: Graduates of this great academic enterprise shall apply their intellectin whatever direction they choose.

And, oh, the directions you are choosing.With your talents and your creativity, you are entering all arenas of our changing world with your critical thinking, your research prowess, and your passion for compassion.You are going to enhance our communities, our universities, our corporations, and our public institutions.

You are going to do it by taking the work of those who came before you and exploding those findings, those theories and those accomplishments in ways none of us can yet imagine.That is your challenge, and your obligation.

Consider this case study from theUniversityofMichigan, which I know best, though I know similar stories exist at Notre Dame.

Fifty-seven years ago, a graduate student like you received his doctoral degree in chemistry, and leftMichiganto conduct research into drug therapies for treating cancer.

After several years in the lab, Jerome Horwitz felt he and his colleagues had created a compound that would slow the growth of cancer cells.Alas, his tests in mice showed no positive progress, and Dr. Horwitzs synthesized drug was put on the shelf.He was the first to say his experiment had failed miserably.

Fast forward 20 years to another alumnus.It is the mid-1980s and a new disease called AIDS is causing what amounts to panic in medical and public health circles.Dr. Samuel Broder is a researcher and administrator at the National Cancer Institute who is desperately seeking something that will stop the disease.

When a drug company came forward with Dr. Horwitzs forgotten compound, Samuel Broder saw a glimmer of hope.Where Dr. Horwitzs drug was ineffective with cancer, the AIDS virus responded differently to the compound.

Dr. Broder became a champion of the drug Dr. Horwitz created.He experimented with the compound, pushed for clinical trials, and lobbied for FDA approval.In 1987, that drug – AZT – became the first genuine treatment for AIDS.It helped transform the diagnosis of HIV from a death sentence to a chronic disease that can be managed.

The story of Drs. Horwitz and Broder is one of patience and perspective – skills I believe you have honed throughout your graduate studies.Where Jerome Horwitz conceded failure and advocated patience, Samuel Broder saw potential and hope.The difference between them was two decades and the right disease.

It reminds me of the Paul Simon lyric,One mans ceiling is another mans floor.

Each and every one of todays graduates has provided our world with a unique perspective through your dissertations and theses.You have explored complex issues, created new knowledge and contributed scholarship for tomorrows world.You have built upon the accomplishments of your predecessors, and you are creating a stronger foundation of knowledge for tomorrows graduate students.

Most importantly, you are representing Notre Dame as a great research university.Notre Dame has always prided itself as beingone of the most powerful means of doing good in this country,and you are now its ambassadors.

One of the great figures in Notre Dame history is Father John Zahm.He was a scientist, a student of Dante, and a man of God.He explored the Amazon with Teddy Roosevelt.I believe he and I would have hit it off, because he was a vocal advocate of women in higher education, particularly in the sciences.

Like Henry Tappan atMichigan, John Zahm looked to the great German universities as models for research and advanced learning.And like Tappan, he faced his share of criticisms for his beliefs.

But in advocating that Notre Dame could and should be one ofAmericas great universities, Father Zahm was prophetic.This class of graduates, and these campus leaders who are driving Notre Dame in such an important direction, signal an important new chapter in your storied history.

Graduates, we expect greatness of you.You have the skills and the perspectives that come with a graduate degree, and you have the heritage of a remarkable university.The foundation upon which you stand is your Notre Dame education.The heights you will reach are limitless.

Congratulations on a job well done, and best of luck to you.