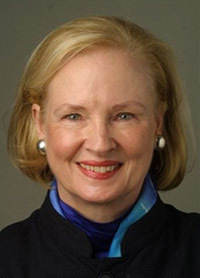 “Both as a public intellectual and as a diplomat, Mary Ann Glendon has impressively served our Church and our country,” said Notre Dame’s president, Rev. John I. Jenkins, C.S.C. “She is an articulate and compelling expositor of Catholic social teaching who exemplifies our University’s most cherished values and deserves its highest praise.”

Internationally renowned as a scholar of law and philosophy, Glendon is the Learned Hand Professor of Law at Harvard Law School. She also has taught at Boston College, the University of Chicago and the Gregorian University in Rome.

Glendon’s eclectic scholarship concerns political theory, international human rights, and comparative constitutional law in the United States and Europe. She is the author of several books, including “A Nation Under Lawyers: How the Crisis in the Legal Profession is Transforming American Society,” “Rights Talk: The Impoverishment of Political Discourse,” “The Transformation of Family Law: State, Law and Family in the United States and Western Europe,” “Abortion and Divorce in Western Law,” “A World Made New: Eleanor Roosevelt and the Universal Declaration of Human Rights” and “Traditions in Turmoil.”

In 1994, Glendon was appointed by Pope John Paul II to the newly created Pontifical Academy of Social Sciences. In 1995, he named her to lead the 22-member delegation of the Holy See to the Fourth U.N. Women’s Conference in Beijing. From 2002 to 2005, she served as a member of the U.S. President’s Council on Bioethics. In 2004, Pope John Paul appointed her president of the Pontifical Academy of Social Sciences. Following the post-presidential election custom, Glendon resigned as U.S. ambassador to the Vatican early this year and has returned to Harvard, where she is at work on a book, “The Forum and the Tower,” about simultaneous practitioners of philosophy and politics.

“I have long been fascinated,” she explained recently, “by how persons like Plato, Cicero, Tocqueville, Burke, Weber and others dealt with the push and pull between those two worlds. Now, after having spent some time in the forum myself, I’m looking forward to getting back to the ivory tower and finishing the project.”

The Laetare (pronounced Lay-tah-ray) Medal is so named because its recipient is announced each year in celebration of Laetare Sunday, the fourth Sunday in Lent on the Church calendar. “Laetare,” the Latin word for “rejoice,” is the first word in the entrance antiphon of the Mass that Sunday, which ritually anticipates the celebration of Easter. The medal bears the Latin inscription, “Magna est veritas et prevalebit” (“Truth is mighty, and it shall prevail.”)