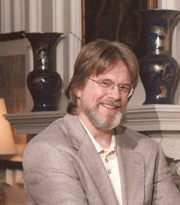 After more than 30 years away from Notre Dame, John Sherry found upon his return that, while some things have changed, the essence of the University remains very much the same as it was during his undergraduate days.

Having been here as a student, Notre Dame has a special place in my heart,said Sherry, who left Northwestern University to come here as the Herrick Professor of Marketing and chair of the marketing department.The actual physical plant is probably twice as big as it was when I was in school, but the atmosphere remains the same. Ive talked to other alums on the faculty who have had similar experiences.

I dont know how corny this sounds, but in walking around here, you feel really grounded. The presence that the place exerts on you is really palatable.

Sherry wasnt looking to leave Northwesterns Kellogg School of Management, but when the opportunity arose at his alma mater, he grabbed it.

I had accomplished a lot at Northwestern, my youngest son was heading off to college (the University of Iowa), and there was a need at Notre Dame,Sherry said.So, it seemed like the timing was right.

The hallmark of the Notre Dame marketing department is the role of marketing in society, and that, too, played into Sherrys decision to accept the Universitys offer.
The marketing and society aspect here is a good fit for me as an anthropologist,Sherry said.It seemed to me, I could make a contribution.

In addition, theres the interrelation between marketing and morality, so its interesting to be at a place where that kind of conversation goes on all the time.

As an anthropologist, Sherry studies consumer behavior from a slightly different perspective.

My approach,he said,is based on the direct perspectives of consumers or managers. I literally go into the marketplace with them in hopes of better understanding the moment-by-moment lived experience of people.

After graduating from Notre Dame in 1974, Sherry went to the University of Illinois, where he earned his masters and doctoral degrees. He spent two years teaching at the University of Florida before his appointment to the Northwestern faculty in 1984.

As a senior at Notre Dame, Sherry won the 155-pound championship in the annual Bengal Bouts boxing tournament. The framed drawing of a boxing glove with the words1974 Champis in the center of one wall in his office. Hanging that prize was, he says with a laugh,my first official act as department chairman.It made him feel right back at home.