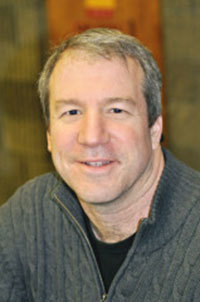 Mark Brazaitis is the winner of the University of Notre Dame’s 2012 Sullivan Prize for his collection of stories, “The Incurables.”

The Sullivan Prize, which began in 1996, is awarded biennially to an author who has already published at least one volume of short fiction. The winner receives a thousand dollars and publication by the University of Notre Dame Press.

Valerie Sayers and William O’Rourke, both professors of English and former directors of Notre Dame’s Creative Writing Program, were the judges. O’Rourke commented that this year, “Once again, the difficulty in judging was extreme; we had to contend with an excess of riches, but Brazaitis’ collection stood out amongst the many worthy (manuscripts) we had to consider.”

Brazaitis has published two collections of stories (“The River of Lost Voices,” University of Iowa Press, 1998, and “An American Affair,” Texas Review Press, 2006) and a volume of poetry, “The Other Language,” ABZ Press, 2009. His award-winning short stories have appeared in Ploughshares, Passages North, Confrontation, Shenandoah and The Greensboro Review, among other publications, and have been cited in the Pushcart Prize annual and Best American Short Stories volumes.

Brazaitis is the director of the Creative Writing Program at West Virginia University and is the recipient of an NEA fellowship, and was a former Peace Corps volunteer and technical trainer. “The Incurables” will be published by the ND Press in the fall of 2012.