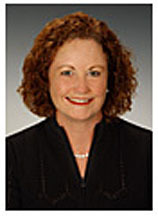 The depth and breadth of experience that Marianne has in the legal arena is impressive and ideally suited for handling the many issues that universities face in todays world,Father Jenkins said.I am delighted that she will be returning to her alma mater and look forward to working with her for many years to come.

I am thrilled to be coming back to Notre Dame, especially at such an exciting time in its evolution,Corr said.Like so many people worldwide, I have a passion for this University, and I am eager to join its team and work to further its mission.

Corr will oversee all University legal matters, including those related to human resources and employment policies, faculty, student policies and discipline, business negotiations and contracts, intellectual property, immigration, litigation and risk management. She will direct an office composed of five other attorneys and administrative staff.

Corr joined Textron in 1996 and was appointed to her current position in 2002. A $13.2 billion company based in Providence, R.I., with 44,000 employees in 34 countries, Textron ranks 202nd on the Fortune 500 list of U.S. companies and operates in the industrial manufacturing, financial, aviation, and defense and intelligence sectors. Among its best known brands are Bell Helicopter and Cessna Aircraft.

Corr has been responsible for all litigation involving Textron and its current and discontinued operations, including products liability, complex commercial matters, employment, environmental issues and intellectual property. She is a member of Textrons Legal Council and Diversity Team, and she serves on the Benefits Committee.

Corr has completed Textrons Global Leadership program at the University of Pennsylvanias Wharton School. She is a member of the boards of the Rhode Island Convention Center Authority and Rhode Islanders Sponsoring Education, as well as the national Products Liability Advisory Council. She also is a member of the Capital Campaign Committee for Women&Infants Hospital.

From 1981 to 1992, Corr was an associate and then partner in the international law firm Jones Day, handling cases and matters in a variety of areas, including products liability, antitrust, white-collar crime, securities, occupational safety and health, and corporate investigations. She was subsequently a partner in the Corr Law Offices, a general trial practice firm in Warminster, Pa., near her hometown of Philadelphia.

A 1978 graduate of Notre Dame with a bachelors degree in government and international studies, Corr earned her juris doctor degree from Duke University School of Law and a masters degree in trial advocacy from Temple University Law School.