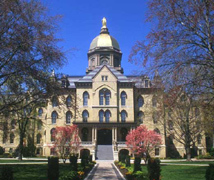 When the heavy, double-doors of the Main Building at Notre Dame opened for the first time 125 years ago, just 344 students walked through. But that was 344 more than could have been reasonably expected just a few months earlier.p. The Main Building was constructed between May and September of 1879 after a building of the same name and in the same location burned to the ground in a catastrophic fire April 23. There were no fatalities and only minor injuries to students, faculty, staff and South Bend residents who unsuccessfully fought to save the building.p. The same could not be said of the condition of the University. The ruined structure had housed virtually all of the Universitys operations, and its destruction put the future of the 37-year-old school very much in doubt.p. Notre Dames founder, Rev. Edward F. Sorin, C.S.C., had left the campus a few days before the fire for a trip to his native France. Then 65, the priest had traveled as far as Montreal when he received word that his school now lay in ashes. He returned immediately and, after surveying the smoldering ruins, told his fellow Holy Cross priests and other faculty members, “If it were all gone, I should not give up!”p. He went on to say: “This fire has been my fault. I came here with the vision of a great university and named it after the Mother of God. Then, I built a great building – so I thought. But she had to burn it to the ground to show me that my vision was too narrow. Tomorrow, when the bricks are cooled, we will clean them and begin again. But this time, we will build a really large building, and when it is finished, we will place a magnificent Golden Dome above it to show to all the glory of Notre Dame, the Mother of God, who has inspired my lifes work.”p. The next morning, Father Sorin and others were back on the scene, pushing wheelbarrows and beginning the task of rebuilding Notre Dame. A national design competition was quickly conducted and 30-year-old Chicago architect Willoughby Edbrooke was awarded the commission for a new Main Building. Ground was broken May 17.p. Working at a rapid pace, some 300 laborers finished three of the buildings five stories by July 4, and much of what stands today was completed when classes for the 1879-80 academic year began Sept. 8. “Modern” features of the building included gas illumination, steam heat, and running hot and cold water in the lavatories.p. The famed Golden Dome that stands atop the Main Building was added in 1882, followed by the east and west wings two years later, bringing the facility to its current size of 144,000 square feet.p. When the dome was erected, many administrators thought golden gilding would be too extravagant and suggested painting the dome yellow. Father Sorin resisted and, after four years of deadlock, he prevailed – the dome, topped by a 16-foot-tall, 4,400-pound statue of Mary, was covered in gold leaf.p. From its construction until the mid-1900s, the Main Building housed many and varied units of the University – residence halls, classrooms, art studios, administrative and faculty offices, a ticket office, dining halls, a faculty apartment complex, a museum, study halls, and, until 1917, the library. Since the 1950s, the building has been used primarily for administrative offices and classrooms.p. As the Main Building aged, its demolition – a thought almost impossible to even imagine now – twice was considered – in 1947 and in the 1960s. It survived those threats, though the fifth floor was closed for many years because of safety concerns. By the 1980s, it was in dire need of repair, and in the early 1990s University trustees and officers decided to undertake a massive renovation.p. A yearlong exterior repair project began in 1995, and from July 1997 to July 1999, the building was closed for a Herculean interior restoration. The $58 million project, funded through the generosity of more than a dozen benefactors and the sale of tax-exempt bonds, returned the public areas of the Main Building to their 19th century Victorian elegance, brought office areas to 21st-century standards, and included structural reinforcements that have made the building sturdier. Other notable elements of the project included the addition of two elevators, the repair and reopening of the fifth floor, and the restoration of the elaborate artwork on the walls, the Christopher Columbus murals in the main corridor, and the allegorical mural on the interior of the dome.p. An important part of the renovation was the construction of three classrooms, preserving one of the buildings historic functions. Among the administrative units located in the Main Building are the presidents and provosts offices, the Graduate School, University Relations, Public Affairs and Communication, Finance, Business Operations, Student Affairs, Admissions, Financial Aid and the Registrar.p. At the center of the lower level is a display honoring the recipients of Notre Dames Laetare Medal, which is regarded as the most prestigious award given to American Catholics. Also on the lower level are plaques honoring recipients of the Notre Dame Award, established in 1992 to honor men and women of all faiths and nations who have made noteworthy contributions to humankind, and the Wall of Honor, which recognizes people from Father Sorin to the present who were instrumental in Notre Dames rise from a modest Midwestern boysboarding school to one of the nations leading institutions of higher learning.p. The Main Building stands at the heart of the Notre Dame campus and, on the 125th anniversary of its construction, remains central to the life of the University.p.