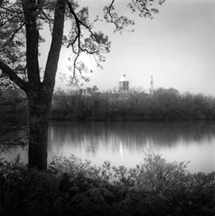 The Spirit of Holy Cross,an exhibition of 20 impressionistic photographs of scenes and sites of special significance in the life of Blessed Father Basil Moreau, C.S.C., has been mounted on the walls of the second, third and fourth floors of the University of Notre Dames Main Building.

The photographs, silver gelatin prints by Steven Scardina, were taken in 2003 in Father Moreaus native France and on the Notre Dame campus.Father Moreau, the 19th century French churchman and founder of the Congregation of Holy Cross, was beatifiedor declaredblessedby the Catholic Church in a ceremony in Le Mans, France, on Sept 15.Beatification is the last step toward canonization, the formal declaration of sainthood.

Led by Rev. Edward F. Sorin, C.S.C., members of the Congregation of Holy Cross founded the University of Notre Dame in 1842.

In addition to photographs of well-known landscapes and interiors of the Notre Dame campus, the exhibition includes several photographs of sites in France, including the chapel ofSainte-Benoît les Rivíeres in Ahuille, where Blessed Father Moreau was baptized; the Church of the Visitation in Le Mans, where he was ordained a priest; the monastery of Le Grande-Trappe in Normandy, where he made frequent retreats; and the Church of Notre-Dame de Sainte-Croix in LeMans, which he built and where his body is entombed.

The Spirit of Holy Cross,the first of what will be a continuing series of exhibitions to be mounted in the Main Building, will be on display until the end of this semester.

Scardina, a native of Chicago, began his career in photography in 1993.