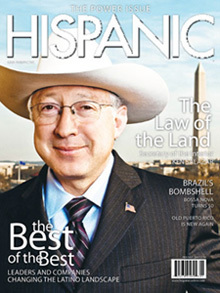 Hispanic Magazine has ranked the University of Notre Dame 16th on its 2009 list of “Top 25 Colleges for Hispanics,” the seventh year the University has made the list since its debut in 1999.

Also posted on the magazine’s Web site is Chevrolet’s “2008-2009 Guide to the Top 25 Colleges for Hispanics,” which ranks Notre Dame 24th.
Diversifying Notre Dame’s population has been a top priority for the University for more than two decades. Since 1987, minority enrollment has increased from 7.5 percent to more than 21 percent. Hispanics currently constitute 9 percent of undergraduate enrollment.

Hispanic Magazine noted Notre Dame’s Institute for Latino Studies (ILS) and its Center for the Study of Latino Religion, along with the student organization La Alianza, which strives to unite, educate and embrace the Latino community. Each year, the ILS sponsors the Latino Community Leadership Seminar, which brings 40 top Latino high school students to campus in an effort to foster commitment to the community and Catholic tradition, introduce them to Notre Dame, and allow them to earn one college credit.

Founded in 1999, the ILS plays a pivotal role in providing an academic environment that advances knowledge and understanding of the Latino experience in the United States. As an interdisciplinary unit, the institute seeks to incorporate the study of the Latino population of the United States as a vital component of Notre Dame’s academic mission and also provides an administrative home and support for the Latino student clubs on campus.

“Students are central to our mission and have been incorporated into the life of the institute from the beginning,” said ILS director Gilberto Cardenas, assistant provost for institutional relations and the Julian Samora Professor of Latino Studies. “Recognizing that the needs of individual students vary, we strive to create a sense of community at Notre Dame through maintaining a balance among education, research and outreach. We have established both a minor and supplementary major in Latino studies and offer a variety of classes in fields including political science, sociology, theology, literature, history and art.”

Founded in 1987, Hispanic Magazine is the premier publication for Hispanic Americans, with a focus on business, careers, politics, culture and stories about people and issues of interest to Hispanics. This month’s issue ranked Harvard University first, followed by Princeton and Yale Universities. The complete list of rankings is available at http://www.hispaniconline.com/HispanicMag/2009_02-03/Feature-Colleges.htm.