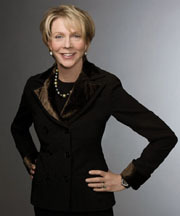 Cathie Black once asked for a raise before she ever even started a job. As an inexperienced 24-year-old receiving a major promotion at Holiday magazine, Black figured if she didnt take the chance and ask, she certainly wouldnt get more money. And what was the worst that could happen?

Black didnt get fired, as many might expect. Instead, she got a raise and perhaps the first validation of her career philosophy of taking risks in order to become not just a success, but a superstar.

The philosophy has served Black well. As president of Hearst Magazines, she manages 18 of some of the industrys best-known titles, including Cosmopolitan, Esquire, Good Housekeeping and O, The Oprah Magazine. She oversees nearly 200 editions in more than 100 countries.

Black will speak at the University of Notre Dame at 7 p.m. Oct. 2 (Thursday) in the Mendoza College of BusinessJordan Auditorium. The speech, part of the Berges Lecture Series in Business Ethics, is free and open to the public.

Much of Blacks talk will center on her best-selling book,Basic Black: The Essential Guide for Getting Ahead at Work (and in Life),published in 2007. The book is part practical advice for women balancing work and family lives, and part a motivational speech for becoming a career superstar. Herrulesinclude,The worst-case scenario is rarely as bad as you think,andTake risks that are calculated, not crazy.

Among her many achievements, Black is credited widely for the success of USA Today, where she was president then publisher for eight years beginning in 1983. She also served as president and chief executive officer of the Newspaper Association of America, the industrys largest trade group, from 1991 to 1996. Black also has been honored as one of Forbes100 Most Powerful Womenand Fortunes50 Most Powerful Women in Business.She has been a member of Notre Dames Board of Trustees since 1992.

The Berges Lecture Series, sponsored by the John A. Berges Endowment, is presented by Notre Dames Center for Ethics and Religious Values in Business and Institute for Ethical Business Worldwide.

The next speaker in the series, Joe Loughrey, president and chief operating officer of Cummins Inc., will presentEthical Leadership in Business,at 7 p.m. Nov. 11 in Room 141 of DeBartolo Hall.
For more information, visit www.nd.edu/~cba/BergesLectureSeries on the Web.