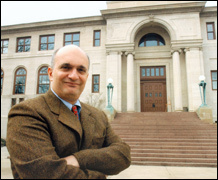 Michael Lykoudis, formerly chair of the University of Notre Dame School of Architecture, has been named dean of the school, effective immediately, according to Nathan O. Hatch, Notre Dame’s provost.p. The change in title recently was approved by the University’s Board of Trustees. Lykoudis was appointed to a five year term, the first two years of which have already been served as chair of the School of Architecture.p. “I am pleased to elevate the status of Michael’s title to that of dean,” said Hatch. “I look forward to continuing to work closely with him to move forward with the strategic goals and plans of the School of Architecture.”p. Two other members of the school’s faculty also have received new titles and appointments. John Stamper, associate professor of architecture and previously associate chair, has been named associate dean, and Rev. Richard Bullene, C.S.C., assistant professor of architecture and formerly assistant chair, has been appointed assistant dean.p. Lykoudis has led the school since 2002 and has been a member of the Notre Dame faculty since 1991. A national and international leader in linking architectural tradition and classicism to urbanism and environmental issues, he is the co-founder and president of the Classic Architecture League, a nonprofit organization devoted to the study and promotion of traditional architecture and urbanism.p. A graduate of Cornell University, Lykoudis earned his master’s degree from the University of Illinois’ joint business administration and architecture program. Prior to joining the Notre Dame faculty, he worked as a project designer and architect for firms in Florida, Greece, Connecticut and New York. He also has conducted his own practice in South Bend, Athens, and Stamford, Conn. His built work includes renovation of the director’s residence at the Louis Pasteur Institute in Athens, renovation of the National Observatory of Greece, and new construction of several private buildings and residences, including his own home in South Bend.p. An architect and architectural historian, Stamper joined the Notre Dame faculty in 1984 and teaches architectural history for the sophomore survey and design in the fourth- and fifth-year studios, including the South Bend Urban Design Center. He served as director of the University’s Rome Studies Program from 1990 to 1999 and has been a recipient of Notre Dame’s Kaneb Award for outstanding teaching of undergraduates.p. Stamper earned bachelor’s and master’s degrees in architecture from the University of Illinois, and a second master’s degree in art history from the Williams College and Clark Art Institute graduate program. He received his doctorate in architectural history from Northwestern University.p. Father Bullene earned both his bachelor’s and master’s degrees from Notre Dame and earned his doctorate in architectural theory from the University of Pennsylvania. He has served on the South Bend Historic Preservation Commission and the diocesan Committee on Art and Environment. A member of the Notre Dame faculty since 1993, Father Bullene teaches first-year courses in drawing and theory, and fifth-year design courses.p. _Contact: Kara Kelly, director of communications, School of Architecture, 574-631-5720, kelly.166@nd.edu _