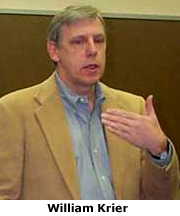 A romance comedy starts when a couplemeets cute,a term attributed to movie critic Roger Ebert, and ends at the point where love conquers all.

Its also the plot of Frank Capras 1934 surprise hitIt Happened One Night,the movie that started it all, says William J. Krier, associate professor of English at Notre Dame.

It was the first film to sweep all five Oscar categories,said Krier, who teaches American film and is interested in film genres, including romance comedies, westerns and detective stories.

His current research focuses on questions of love and identity in the romance comedy. What sparked his interest, he says,was a particular idea, that romance comedy told a unique version of a love story that I hadnt heard anywhere else. There is equality between the genders. If you want to find strong, independent, intelligent women, the place you look is romance comedies.

InIt Happened One Night,runaway heiress Ellie (Claudette Colbert) and out-of-work newspaper reporter Peter (Clark Gable) meet when they argue over the last seat on a bus. As the movie opens, Ellie has escaped from a wealthy father who has kept her imprisoned on his yacht.

Walking away from ones previous life is a common thread in romance comedies, according to Krier.

In the first 10 or 15 minutes of the movie, the character discovers that her old life is too small, or shes too big for it,he said.Whatever you were doing, you realize that its not right for you. But where youre going, and what youre going to do next, are unclear.

The question of identity is also central to the plot of many romance comedies, he says. Often, one of the characters pretends to be someone theyre not. Its possible for us to have many identities, Krier says,but theyre not us.At the movies, characters learn to love each others greater, best self, not just a narrow part of who they are.

What is it that gives the romance comedy such lasting appeal?

The easiest thing to say is that its the nagging belief that we are more than the life were living, that there are parts of us that are being unused,Krier said. Something happens,and you no longer fit your identitythe person you were. But you have no idea what you will become. While youre in that limbo, you meet a similarly marginalized person. The plot gives them something to do together.

In the world of romance comedies, the couple breaks free from their former lives, creates a new identity together, and lives happily ever after. Who they become, Krier says, is the person who loves, and is loved by, another. The story ends with a marriage.

Of course the romance comedy doesnt offer instructions for life after marriage. Thats the stuff of how-to books.Our day-to-day life isnt a story until something goes wrong,he said.

But the romance comedy is a Hollywood genre that has stayed popular for 70 years. For those in the mood for a romantic movie to watch some Saturday night, he recommends a couple of lesser-known titles:Keeping the Faith,andFrench Kiss.And, of course,It Happened One Night.

This (romance comedy) could not exist if people didnt believe it,Krier said.They want to hear it again and again. One of the things romance comedies can do is remind us of our best selves. The appeal is the idealism in them. If you go to movies to get away from life, its good to see movies that let you see your best self. Not see yourself as a serial killer.