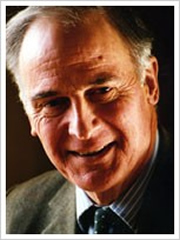 London-based architect Quinlan Terry, principal of Quinlan and Francis Terry Architects, has been awarded the third annual Richard H. Driehaus Prize for Classical Architecture by the University of Notre Dame School of Architecture. Terry will receive a $100,000 cash prize and a bronze and stone replica of the Choregic monument of Lysikrates in Athens at a ceremony March 19 (Saturday) at the University Club of Chicago.

Richard H. Driehaus, founder and chairman of Driehaus Capital Management in Chicago, endowed the annual award to honor a major contributor in the field of traditional and classical architecture.

Terrys work includes the redesign of three state rooms in the office and home of the British prime minister at 10 Downing Street, Merchant Square at Colonial Williamsburg, and the Richmond Riverside Development in Great Britain. Other projects include a series of villas in Londons Regents Park; Richmond House, a Cambridge office building; Paternoster Square, an office block in London; and Brentwood Cathedral in Essex, England.

Terry, educated at Londons Architectural Association, was a Rome Scholar in The British School in Rome, which promotes education in architecture, fine art and history. He received the European Prize from the Philippe Rotthier Foundation in 1984 and in 2002 he was honored with the Arthur Ross Award from the Institute of Classical Architecture and Classical America. His library at Downing College, Cambridge, was named the “Building of the Year” by the Royal Institute of British Architects in 1994, and a private residence he designed in Dorset, England, received the Best Modern Classical House award in 2003 from the Georgian Group.

The Driehaus Prize was established through Notre Dames School of Architecture because of its reputation as a national leader in incorporating the ideals of traditional and classical architecture into the task of modern urban development.