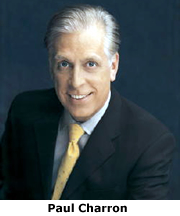 Paul Charron, chairman of the board and chief executive officer of Liz Claiborne Inc. and a 1964 graduate of the University of Notre Dame, will speak at 4 p.m. Thursday (Sept. 14) in Jordan Auditorium of the Universitys Mendoza College of Business.

The talk, which is part of the colleges Boardroom Insights series, is free and open to the public. Charron is the second of six senior business executives speaking this semester on issues, concerns and experiences found incorporate boardrooms.

Charron joined Liz Claiborne in 1994 as vice chairman, chief operating officer and a director. A year later, he became chief executive officer and president, and a year after that he was appointed chairman of the board. He previously served in senior executive capacities, including group vice president and executive vice president, at VF Corp.

Liz Claiborne designs and markets an extensive range of womens and mens fashion apparel and accessories. It also markets fragrances for men and women and has the exclusive license to produce mens and womens collections of DKNY and jewelry under the Kenneth Cole brand name.