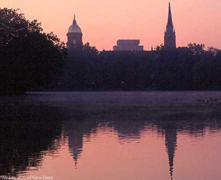 For many Notre Dame students, each day at the University is a dream come true. Take Justin Oldham, for example. The junior from Princeton, Ind., recalls the day he set his sights on Notre Dame after he visited campus while still in just the eighth grade.p. “I called home and after my dad answered, I simply stated, ‘My college search is over,’” Oldham remembers. “The funny thing about this statement was that he had no idea that my search had even begun, much less already come to a conclusion.”p. From that moment on, Oldham knew he was destined to become a Domer. He worked hard, but despite all his best efforts, was not accepted as a first-year student. Rather than give up, though, he became even more determined to make his dream a reality. He enrolled at Purdue University, but remained a Notre Dame man at heart, studying diligently, and loyally, beneath a poster he received from the University’s admissions office and tacked to the wall above his desk. Its message was simple and motivational – “Nowhere Else But Notre Dame.”p. The next year, Oldham reapplied and, this time, received his letter of acceptance.p. “I now have that poster above my window in my dorm room,” he said. “Through that window is one of the best views of the Dome on this campus.”p. Students like Oldham, and their parents, are the reason Notre Dame has been ranked for the second consecutive year among the top 10 “dream schools” in the nation in a Princeton Review survey of college applicants and parents. Notre Dame takes the eighth spot, preceding, in order, NYU, Harvard, Stanford, Yale, Duke, Columbia, and Princeton, and trailed by Georgetown and Cornell. A total of 3,036 students and 303 parents participated in the unscientific survey, answering the question, “What college would you most like to attend (or see your child attend) were admission prospects or cost not issues?”p. In addition to the Princeton Review ranking, Notre Dame also has been honored in other recent surveys:p.  The Notre Dame School of Architecture has been ranked among the top 10 in the nation in a yearly survey by DesignIntelligence and the Design Futures Council, in conjunction with the Almanac of Architecture and Design. The school ranked ninth among National Architectural Accrediting Board-accredited institutions in the 2004 study, which surveyed some 1,100 architectural firms to determine which schools produce the most qualified graduates.p.  Notre Dame was ranked 12th among national universities in “Project Connect,” a survey by Carnegie Communications conducted to determine student perceptions of quality. Nearly 4,000 college-bound high school students from across the country participated in the study, in which they were presented with a list of the nation’s top 50 national universities, as determined by U.S. News and World Report, and answered the question, “Which of the following institutions do you feel are among the best colleges and universities in the United States?” Notre Dame ranked seven spots higher in the Carnegie survey than in the U.S. News study, in which it ranked 19th.p. While rankings and surveys certainly carry some weight among students, parents and academics alike, for many, the most significant polls are taken right on campus, by talking to students who have fulfilled their dreams of coming to Notre Dame.p. “Notre Dame was my dream school because it seemed to me to be the culmination of all the things I was searching for in an institution of higher education,” said sophomore Barbie Sloan, who also put Notre Dame at the top of her college wish list as a high school student. “However, within its image as a dream school lies the demand for an insatiable work ethic and commitment to bringing everything you have into the activities and academics you choose to pursue. I know the commitment will make all the hard work worthwhile because what I learn here, both in and out of class, will extend into the things I do when I graduate.”p. As long as students continue to rise to the challenge, the University is committed to keeping its end of the bargain, striving for excellence, to ensure the reality of the Notre Dame experience lives up to the dreams of its current and future students.p.