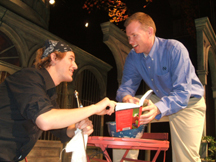 When Jay Paul Skelton went looking for the right person to direct this years mainstage Summer Shakespeare production ofLoves Labors Lost,he didnt have to go far. Or anywhere at all, actually.

Nepotism? Perhaps. But for Skelton, now in his second year as Ryan Artistic Producing Director of Summer Shakespeare at Notre Dame, he was the obvious choice for the job. Hed already been handling the administrative aspects of the production, with his creative side waiting in the wings.

When I inherited the position of heading up Summer Shakespeare, it wasnt part of the job description to direct at all,he says.In the past, it had been more of a producing position – hiring the person to direct and hiring the actors and the people who are going to support each program.

But with nearly two decades of directorial experience and some 85 theatrical productions under his belt, it was only a matter of time before Skelton would land back in the directors chair. He currently is leading a full professional cast of actors – some from big companies in Chicago and elsewhere, some students, some enlisted from the ranks of community theater – in one of Shakespeares most delightful comedies, which will take the stage Aug. 21 to Sept. 2 in the Decio Theatre of the DeBartolo Center for the Performing Arts.

With the actors coming from such a mixed bag of theatrical backgrounds and levels of experience, Skelton says one of the challenges of directing such a production is striking the right balance to treat everyone as an equal member of the company. Another is the potential for inner conflict while wearing both hats – creative and administrative.

The director part of me may want an additional piece on the set, but the administrator has to ask, Is there money in the budget? Is that really necessary?he explains.

Originally from Massachusetts, Skelton did not always dream of being a director; his pursuits were more athletic in nature. But in between high school sports seasons, he occupied his extra-curricular time with student theater productions.

His love of the stage followed him to college, where, in the midst of earning his marketing degree from Babson College, a business school in Wellesley, Mass., he fell in with the theater crowd and rediscovered his true calling. As head of the dramaclub during his senior year, he offered to direct the musicalGreaseas a way to save money.And it was the most fun I ever had,he remembers.Several cast members came up to me at the cast party and said you should think about doing this, youre really good.

After working as a marketing and press assistant for a theater company in Boston, he went on to earn his MFA from The Theatre School at DePaul University and to work as a freelance director in Chicago and New York until last year, when Notre Dame came calling, giving him an opportunity to utilize both his business and artistic skills.

So far, Skelton gives himself good early reviews and says things are going well with the upcoming production. But that doesnt mean hell be back for an encore anytime soon.

I dont think Im going to hire myself again next year,he says.Because I think in the interest of having a healthy organization, you want a different viewpoint on a regular basis.

But dont be surprised if his name appears in the program again one of these years.

I would hope that I would want myself back at some point in the future.