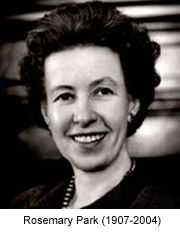 Rosemary Park, a leader in women’s higher education and Life Trustee of the University of Notre Dame, died April 17 of natural causes at her home in Los Angeles. She was 97.p. Elected to the Notre Dame Board in 1971, she served for six years before her election as a Life Trustee. She received an honorary degree from the University in 1974.p. Park earned her bachelor’s and masters degrees from Radcliffe College and her doctorate from the University of Cologne (Germany). She served in teaching and administrative positions at Wheaton College (Mass.) and Connecticut College for Women for 18 years before assuming the presidency of the latter in 1947.p. Park was appointed president of Barnard College in 1962, serving for five years before accepting an appointment in 1967 as vice chancellor at UCLA, where she also held an appointment as a professor of education until her retirement in 1974.p. Park was preceded in death by her husband, the renowned Byzantine scholar Milton V. Anastos. His priceless and massive private collection, the Milton V. Anastos Library of Byzantine Civilization, was donated to Notre Dame in 1997.p. Park is survived by one stepson and several nieces and nephews. Memorial services are planned for later this year.p.