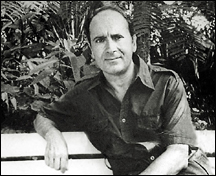 A collection of 311 letters written by the late Argentinian author Manuel Puig, best known for his novelEl Beso de la Mujer Araña(Kiss of the Spider Woman), has been acquired by the University Libraries at Notre Dame.

One of South Americas most renowned authors of the 20th century, Puig wrote a series of novels that often intertwined film, politics and gender, includingBetrayed by Rita HayworthandHeartbreak Tango.His works have been translated into many languages and regularly are taught in Latin American literature and literature in translation courses.

The densely written letters were penned over a period of 30 years to Mario Fenelli, an author whom Puig met in the 1950s when they both attended film school in Rome.Fenellis enthusiastic support of Puigs initial writing projects encouraged him to give up his dreams of becoming a director and realize his true talent in fiction.The letters provide a window into Puigs rise to fame, world travels and fertile creativity.The final correspondence was sent shortly before his untimely death in 1990 at the age of 57.

The collection, funded by library endowments, makes up the largest cache of letters by Puig outside of those held by his family, and includes two movie scripts that Puig and Fenelli wrote together but never saw performed.