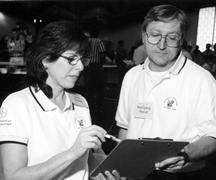 Why would two dozen Notre Dame research engineers volunteer to spend a busy Sunday in December analyzing robots that children have made out of Lego bricks?

Carol Osmer, coordinator of the annual FIRST Lego League Tournament atStepanCenter, has a few ideas: To promote science and engineering, encourage children and reach out to the community. The volunteers mention Osmers persuasive spirit as well.

The kids make it fun,she told the 30 Notre Dame faculty, staff and graduate students she recruited to judge.They have such energy. You may find yourself smiling all day long.

The competition is her passion. It led to her job as administrative assistant in the Universitys Center for Nano Science and Technology, and keeps her volunteering evenings each fall with five Lego League teams atPrairieVistaElementary Schoolin neighboring Granger.

I get to see them as they start, watch the progress,she says.Its a delight.

FIRST Lego League is affiliated with a non-profit organization called FIRST, which stands for "For Inspiration and Recognition of Science and Technology,founded by Dean Kaman, inventor of the Segway people mover.

An international program, FIRST Lego League challenges students to develop presentations and robots based upon a different theme each year. This years topic was equal access for everyone, including the handicapped. The tournament marked the culmination of 10 weeks of research and robot building for the students, ages 9 to 14, and their parent coaches.

Osmer calls the competition sports for the mind, and emphasized that the experience teaches teamwork as well as research and robotics.

She learned about Lego League in 2000 while visiting theFIRSTHigh SchoolRobotics competition inFlorida. She introduced it to Prairie Vista, where her daughter was a student, and coordinated five teams of eight children that year. Their goal was to advance to the state tournament inFt.Wayne. They did better than advance. PrairieVistateams took home five trophies.

One of the parents she met was Wolfgang Porod, Center for Nano Science director and Freimann Professor of Electrical Engineering. He invited her to a meeting to discuss Notre Dame hosting a Lego League regional tournament. Then Porod asked her to help coordinate the first tournament, which took place in December 2001.

This past December, Notre Dame held its fourth tournament, hosting 35 teams from aroundIndiana.

Whats next? Osmer and Porod would like to design the challenge some day. That would involve coming up with a research topic and robot tasks. It would be great to have Notre Dame leading the challenge around the world, they say.

It was my childhood wish to live near a university, for the resources, the bigger library,she said.I pushed my parents to move.

They never did, but since starting work at Notre Dame this fall, she has looked for a way to bring resources of the university to the community. Lego League has helped, she said.

Judge Zoltan Racz, a graduate student fromHungary, said that growing up,we did not have a big event like this with complex tasks. It is something I would want for my own children someday. When I see my advisers – who are so busy with research -volunteering their weekend, I say, I can do the same.