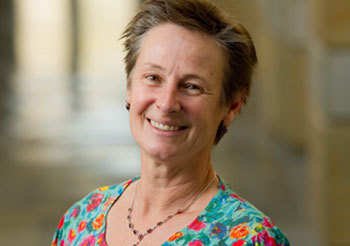 In 2003, with heated debates about Shariah law raging around the U.S. and Canada, legal scholar Julie Macfarlane set out to find out what the controversy was all about. Several years and many hundreds of interviews later, her quest to document and analyze the North American notion of Shariah — Islamic principles that are part of a voluntary system of personal obligation — has resulted in a new book and two new reports for policymakers, religious leaders and the public.

“At first, there was no data on Shariah at all, just negative speculation,” said Macfarlane, a law professor at the University of Windsor (Canada) and adjunct professor of the practice at the University of Notre Dame’s Kroc Institute for International Peace Studies. “News reports implied that terrible things were happening, but it was unclear what the reality was.”

Her report, “Shari’a Law: Coming to a Courthouse Near You?” is the first empirical study to ask North American Muslims what Shariah means in their everyday lives. The study shows that, for North American Muslims, Shariah is a private system of morality and identity, focused primarily on family issues such as marriage and divorce, which most understand as fully compatible with the American legal system.

“In the American Muslim community, which is very highly educated, many people, including those who rarely go to the mosque, still turn to traditional processes to formalize Islamic marriage and divorce,” Macfarlane said. “Most get married, or divorced, twice — once according to their religious tradition and once by the courts.”

In an analysis of American jurisprudence, Macfarlane found no evidence of a takeover of courts by Islamic law. In fact, not one of her interviewees — including imams, legal scholars, Muslim lawyers and others working in the legal system — suggested that the courts should directly apply Islamic law to Muslims or non-Muslims.

Another report, “Understanding Trends in American Muslim Divorce and Marriage: A Discussion Guide for Families and Communities,” is the first empirical study of significant size to examine how North American Muslims approach marriage and divorce.

Macfarlane’s book on the same topic, “Islamic Divorce in North America: A Shari’a Path in a Secular Society,” has just been published by Oxford University Press. The book is “a comprehensive, honest and deeply sensitive study of some of the most challenging and contentious issues facing North American Muslims,” writes Shahina Siddiqui, president and executive director of the Islamic Social Services Association of Canada.

Macfarlane said her goal in writing was to “take the lid off of a taboo topic in a kind and sensitive way, and to encourage the conversation to keep going within the Muslim community — as well as inform discussion inside the non-Muslim community.” The book “reminds us how similar we are across our religious identities,” writes John Paul Lederach, professor of international peacebuilding at the Kroc Institute, “and how important and relevant it is to constructively address the relationships between faith, meaning and place in contemporary secular democracies.”

Macfarlane has researched and written extensively on dispute resolution and the role of lawyers. An active mediator and consultant, she has conducted skills-based training for lawyers all over the world. She also is the author of “The New Lawyer: How Settlement Is Transforming the Practice of Law.” At the Kroc Institute, she co-teaches a graduate-level course on conflict resolution, along with her husband, Bernie Mayer, also an adjunct professor of the practice.