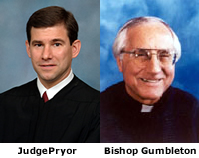 U.S. Circuit Judge William Pryor Jr. of the 11th Circuit Court of Appeals will present the opening lecture in a series of presentations beginning this week at the University of Notre Dame to promote the University’s role as a national Catholic think tank.

Pryor will present his lecture, titled “The Role of Religion in the Judiciary,” at7:30 p.m.Tuesday (Jan. 24) in the ballroom of theLaFortuneStudentCenter.

Appointed to the court last June, Pryor served from 1997 to 2005 asAlabama’s attorney general and has taught atSamfordUniversity’s Cumberland School of Law. He is a graduate ofNortheastLouisianaUniversityand earned his law degree fromTulaneUniversity.

The next lecture in the series will feature Bishop Thomas J. Gumbleton ofDetroit, who will speak on “Catholicism and War” at7:00 p.m.Feb. 23 (Thursday) in Room 141 of DeBartolo Hall.

Bishop Gumbleton, who also serves as vicar general for the Archdiocese of Detroit, was ordained to the priesthood in 1956 and named bishop in 1968. He is founder and co-chair of the Catholic Caucus of Southeast Michigan and a member of numerous advisory boards. A graduate of Sacred Heart Seminary inDetroit, he earned his master’s degree fromSt. John’sProvincial Seminary and his doctorate fromPontificalLateranUniversityinRome.

Presented by Notre Dame’s student government as part of its Catholic Think Tank of America Lecture Series, the presentations are free and open to the public. The series features talks by prominent Catholics and non-Catholics to examine various aspects of spiritual life. **