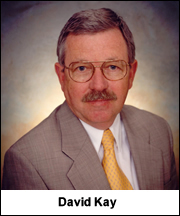 David Kay, leader of the U.S. effort to find weapons of mass destruction in Iraq, will be among the featured speakers in a fall semester lecture series at the University of Notre Dame titledThoughts on the Unthinkable: Perspectives on Nuclear Weapons and Warfare.

The series, which is free and open to the public, is sponsored by the Department of Physics, Center for Social Concerns,CollegeofScience, andReillyCenterfor Science, Technology and Values. **

The lectures, all at7:30 p.m.in the McKenna Hall auditorium, are as follows:

August 29 -How it Came to Pass or the Manhattan Project: A Grunts View,Harold Agnew, a member of the team of scientists that developed the first atomic bomb.On Aug. 16, 1945, Agnew flew toHiroshimaand measured, from the air, over the target, the yield of the first use of the atomic bomb. ** During his distinguished career as division leader and director of Los Alamos, he was instrumental in the development and implementation of theU.S.nuclear weapons program.

October 25 - The Making of the Soviet Bomb: New Revelations, Old Myths, and Lingering Questions,Alexei Kojevnikov, assistant professor of history, University of Georgia and the Institute of Science and Technology, Moscow, and author ofStalins Great Science: The Times and Adventures of Soviet Physicists.

November 1 - The Second Nuclear Age,Hugh Gusterson, assistant professor of anthropology, MIT, and author ofNuclear Rites: A Weapons Laboratory at the End of the Cold WarandPeople of the Bomb: Portraits of Americas Nuclear Complex.He is currently working on his new book,Labs in Crisis: Nuclear Weapons Scientists After the Cold War.

November 8 - Living with the Bomb During the Cold War,Don Howard, professor of philosophy and director of Notre Dames History and Philosophy of Science Program.

November 21 - What is the Future of Non-proliferation?David Kay, senior fellow at the Potomac Institute for Policy Studies and former head of the hunt forIraqs weapons of mass destruction.

December 2 - Title to be announced, Rev. J. Bryan Hehir, prominent scholar on the theory of just war and Parker Gilbert Montgomery Professor of the Practice of Religion and Public Life at Harvard Universitys Kennedy School of Government.