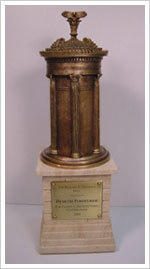 Abdel-Wahed El-Wakil, one of the leading voices in contemporary Islamic architecture and a practitioner known worldwide for his use of traditional form and technique, has been named the 2009 Richard H. Driehaus Prize laureate.

The Driehaus Prize, which is administered by the University of Notre Dame School of Architecture, is awarded annually to an outstanding architect whose work applies the principles of classicism, including sensitivity to the historic continuum, the fostering of community, and consideration of the impact to the built and natural environment.

Over the past four decades, El-Wakil has built mosques, public buildings and private residences throughout the Middle East maintaining balance between continuance and change. His work ñ which includes the Halawa house in Agamy, Egypt, for which he won his first Aga Khan Award for Architecture; the residence of Ahmed Sulaiman in Jeddah; and the Quba Mosque in Medina ñ celebrates the overall principles of Islamic architecture and culture while reflecting the regional character and locality in which each structure resides. He works with traditional design principles that use indigenous materials and processes, and integrates them with contemporary technology to create familiar, functional and environmentally sustainable structures that are both timeless and for our time.

El-Wakil’s craftsmanship resonates throughout the King Saud Mosque in Jeddah, Saudi Arabia, with its magnificent indigenous brick dome, constructed without concrete. His vision shines through in the Oxford University Centre for Islamic Studies in its sensitive blending of two diverse architectural traditions, integrating Islamic design concepts seamlessly into Oxford’s existing vernacular. Much of El-Wakil’s work grapples with that duality of permanence and change, in individual projects and across cultures.

El-Wakil currently is working on three projects in Beirut, Lebanon, including the Ministry of Foreign Affairs, as well as a master planning project in Qatar that integrates best contemporary low-energy planning with climate-tempered Islamic built forms.

Over the past 10 years, Grementieri has served as the project manager for some of Buenos Aires’ most delicate and culturally significant architectural preservation projects including: the Palacio Bosch (United States Embassy), the Err·zuriz Palace (National Museum of Decorative Arts), the Pereda Palace (Brazilian Embassy), and Villa Ocampo (property of UNESCO).

Grementieri leads a strong campaign to preserve the architectural heritage and treasures of Buenos Aires. One of the sites this campaign aims to preserve is the world famous opera house, Teatro ColÛn. This week, Grementieri will release a new book co-authored with Pablo Zunino titled"Argentina’s Cultural and Natural Heritage ñ The Bicentennial’s Album."

Last year, the annual Driehaus Prize was doubled to a $200,000 unrestricted cash award and the Reed Award was doubled to $50,000. Together the two prizes represent the most significant recognition for classicism in the contemporary built environment.