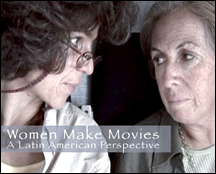 Several lauded Latin American documentary filmmakers will present their films at the University of Notre Dame this fall in the Kellogg Institute for International Studies seriesWomen Make Movies: A Latin American Perspective.

The six movies, to be shown through November, will explore the work of women filmmakers who have sought to understand political and social justice issues facingLatin America. All films will be shown in theHesburghCenterauditorium beginning at8 p.m.

The series opens Sept. 14 (Wednesday) withWar Takes,in which Colombian filmmakers Adelaida Trujillo and Patricia Castaño turn the cameras on themselves to portray the tough realities of civil life in their war-ravaged homeland.

Others films in the series are:

The series, which is free and open to the public, is sponsored by the Kellogg Institute, Gender Studies Program, International Student Services, Institute for Latino Studies, and Department of Film, Television and Theatre.