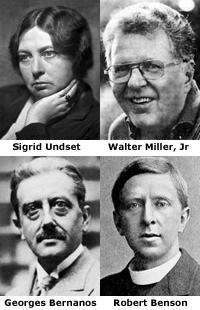 Four Catholic writers whose once well-known works have become undeservedly obscure will be featured in the 2006 Catholic Culture Lectures sponsored by the University of Notre Dames Center for Ethics and Culture.

TheforgottenCatholic writersSigrid Undset, Walter Miller, Jr., Georges Bernanos and Robert Hugh Bensonwill be discussed in a series entitledShining in Obscurity:Rediscovering Four Catholic Authors.Each of the lectures will be given at8 p.m.in Room 155 of DeBartolo Hall, and all are free and open to the public.

On Oct. 24 (Tuesday), Michael Foley, assistant professor of patristics atBaylorUniversity, will lecture onKristin Lavransdatter,by Undset.His lecture,Sigrid Undset: Greatest Catholic Novelist of the Twentieth Century?will concern the most critically acclaimed work of Undset, a Norwegian who in 1928 won the Nobel Prize in Literature, the third woman ever to have done so.Because of her prominence as a critic of Adolph Hitler and National Socialism, her books were banned in Nazi Germany and she became a refugee whenGermanyinvadedNorwayduring World War II.Kristen Lavransdatteris a novelistic trilogy set in 14 th -centuryNorwaywhich follows the life of its heroine through childhood, marriage, and old age.

On Oct. 30 (Monday) Ralph Wood, the University Professor of Theology and Literature at Baylor, will lecture onA Canticle for Leibowitz,by Miller.His lecture,The Call of the Desert in the Age of Ashes,will concern the apocalyptic science fiction novel written by a tormented and brilliant writer who survived a harrowing World War II career as a tail gunner and suffered an excruciating depression which ended with his suicide in 1996.A Canticle for Leibowitzis set in a future,quasi-monastic civilization several centuries after a global nuclear war.

On Nov. 7 (Tuesday) Ralph McInerny, Michael P. Grace Professor of Medieval Studies at Notre Dame, will lecture onThe Diary of a Country Priest,by Bernanos.McInernys lecture,Bernanos and the Noonday Devil,will consider the life and work of the controversial French novelist whose complicated and occasionally contradictory political views seemed always to defer to his passionate devotion to the Catholic Church.The Diary of a Country Priestis a shrewd depiction of the quiet suffering and paradoxical triumph of the dying young pastor of an unremarkable parish in ruralFrance.

On Nov. 14 (Tuesday) David Solomon, W.P. and H.B. White Director of theNotre DameCenterfor Ethics and Culture and associate professor of philosophy, will lecture onLord of the World,by Benson.Solomons lecture,Robert Hugh Benson: Anticipating the Apocalypse,will concern the most famous work of a prolific writer of the early 20 th century who converted to Catholicism in 1903 and became an ardent apologist for his faith.Lord of the World,published in 1907, imagines a future world of the early 21st century, in which a widely accepted ethic of secular humanism has yielded an apparently peaceful, but actually terrifying, society.