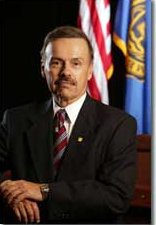 The lectures, sponsored by the U.S. State Department and scheduled for June 6-8 inViennaandLinz, are collectively entitledEvaluating the Progress in the Global War on Terrorist Financing.

Gurulé was interviewed recently by NBC Nightly News on the same topic as it pertains to the U.S. Department of Justice investigation of theNew York Citybranch of the Arab Bank.

A member of theLawSchoolfaculty since 1989, Gurulé has twice taken leaves of absence from the University to work for theUnited Statesgovernment.From 2001 to 2003, he served as the treasury departments undersecretary for enforcement, with oversight responsibilities for the U.S. Secret Service, U.S. Customs Service, Bureau of Alcohol, Tobacco, and Firearms (BATF), Financial Crimes Enforcement Network (FinCEN), Office of Foreign Assets Control (OFAC), and the Federal Law Enforcement Training Center (FLETC).From 1990 to 1992, he was assistant attorney general, in the justice departments Office of Justice Programs.