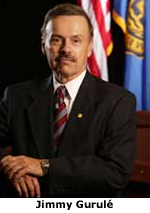 As Jimmy Gurulé faces students in his spring semester classThe Law of Terrorism,he knows his audience is willing to delve into the complexities that al-Qaeda, and global terrorism in general, present.

Too often, says the professor of law, other groups – the public, media and politicians, in particular – have been willing to settle for more simple, black-and-white perspectives, that take a hard line of certainty.

But the issues are extremely complex, defying simple resolution,he said.

Gurulé is among a number of international legal experts who have gained firsthand insight on how the terrorist attacks on theUnited Stateson Sept. 11, 2001, have dramatically changed the law, both domestically and internationally.

His perspective on the recent conviction and hanging-execution of formerIraqleader Saddam Hussein is informed by his participation, in spring 2004, in a Judicial Conference on Rule of Law inIraq. The meetings, inThe Hague, assembled the Iraqi judges who would later try Hussein. Some had been incarcerated under the dictator; all had lived under his iron fist.

Gurulé joined U.S. Supreme Court Justices Anthony M. Kennedy and Sandra Day OConnor and others to fortify the Iraqi judgesfamiliarity with due process, ethics, transitional justice and the Rule of Law.

But his opinion of the subsequent Hussein trial is not favorable.

Despite the atrocities committed by Hussein, his trial was not a model of justice,Gurulé said.It was far from it.

The swift hanging and the way it was conductedcreate an appearance of revenge more than justice.

Many Iraqis may believe justice was served, but the impact and implications are broader.

The audience wasnt just the Iraqi people, but the entire international community,Gurulé said.This was an opportunity for theIraqcourts and government to say, Were ready to assume the responsibility of democracy.

Its going to happen in fits and starts, in retreats, raising questions about whether securing democracy inIraqis really possible,he said.

From 2001 to 2003, while on leave from Notre Dame, Gurulé was undersecretary for enforcement in the U.S. Department of Treasury. During that period, he became convinced that the best way to fight terrorism is to attack the financial underpinnings of the organizations. Al-Qaeda has an estimated annual budget as high as $50 million; Hamasis an estimated $100 million. Often, these coffers are filled with American money raised by Islamic charities with official IRS status.

Theyve also used our financial institutions to facilitate collecting and transferring this money around the world and to underwrite, in some cases, acts of terrorism,Gurulé said.

Shedding light on the scale of these financial operations might convince others thatthe money is more important than going after the members of the terrorist cells themselves. Cutting off some financial pipelines is going to hurt them more,he said.

Since leaving government, Gurulé has been spreading this message to international audiences of government, financial and nonprofit leaders as a consultant for the U.S. Department of State. These conferences have taken him throughout Europe, Latin American and, most recently,India. The information he presents is eye-opening.Its like a light going off,he said.

Gurulé is now at work on a book calledUnfunding Terror: Dismantling the Financial Network of al-Qaeda.His classroom teaching focuses on the many gray areas of law that have developed since the Sept. 11 terrorist attacks.

It is these complexities that give his students endless options for term paper topics, and an important foundation for a career in public service. One former student andLawSchoolgraduate uses this background on the job, in the terrorism and violent crime division of the Department of Justice.