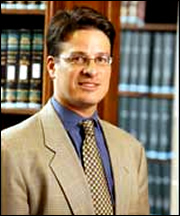 Paolo G. Carozza, associate professor of law in theNotre DameLawSchool, has been elected one of the seven members of the Inter-American Commission on Human Rights.

Nominated by theU.S.government to serve on the commission, he was elected June 7 by the member states of the Organization of American States (OAS) at its 35 th general assembly.

The Inter-American Commission on Human Rights, headquartered inWashington,D.C., is responsible for the promotion and protection of human rights in the Western hemisphere.It receives, investigates and reports on violations of the American Declaration of the Rights and Duties of Man (1948) or the American Convention on Human Rights (1969).The commission also monitors human rights in each of the OAS member states.Elected for terms of four years, commissioners are expected to serve as independent experts rather than as representatives of particular nations.