Five miles separate Clay and John Adams high schools in South Bend. But when it comes to mock trial, the two public high schools, both part of the South Bend Community School Corp., have been worlds apart for most of the past two decades.

Clay, a visual and performing arts magnet school, has never advanced past regionals, and until last year, went three years without a win at any level of competition.

But things are changing.

Thanks, in part, to head coach Henry Leaman, a second-year Law School student at the University of Notre Dame, Clay went 2-4 in regional competition last year and nearly advanced to state for the first time in school history.

“We went into the final round with our destiny in our hands,” said Leaman, a native of St. Charles, Illinois, outside Chicago. “If we had split the round, we would have gone to state. We lost by minus-2 points on each ballot.

“It was crushing,” Leaman said. “But it’s made us incredibly hungry.”

It’s a welcome change for Clay, which had no Law School students on board just three years ago and which is only beginning to establish long-term relationships with the local legal community — unlike Adams, whose list of current and former coaches includes local judges and attorneys with ties to the Law School as well as students, faculty and staff from the Law School itself. Law students and faculty have also traditionally helped coach mock trial teams at other local high schools, including Saint Joseph High School.

Not coincidentally, expectations at Clay are high this year ahead of regionals later this month and the annual state competition in March.

“I think we have a great chance to get to state, and that’s my hope,” said Dianna Christopher, an English teacher at Clay and the team’s longtime faculty sponsor.

If so, Christopher said, the Law School students deserve credit.

“They’ve been phenomenal,” she said. 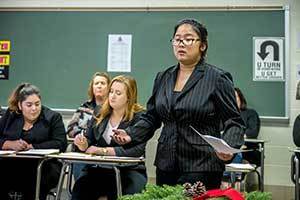 Clay High School Mock Trial teams scrimmage on an evening at Clay High School with Notre Dame Law Students in attendance to act as judges and give feedback and advice. Photo by Matt Cashore/University of Notre Dame

As practiced at the high school level, mock trial is an academic competition in which students participate in a simulated trial in order to learn about the legal system and develop valuable skills in the areas of leadership, public speaking, rhetoric and persuasion.

In preparation for this year’s competition, Clay’s varsity and junior varsity squads faced off in an early scrimmage in November.

Packed into a windowless classroom at Clay, the students acted as lawyers, prosecutors and witnesses in a fictional case involving a high school band director accused of endangering a student by making the student run outside in the heat as punishment for showing up late to practice.

The student, “Addison Cowell,” later collapsed from heat exhaustion, even as the rest of the band retreated inside, according to school policy, because of the dangerously hot and humid conditions.

In a sworn statement before the trial, the director, “Marion Roberts,” described Cowell as consistently tardy and otherwise difficult as lead trumpet.

“Have you had problems with other students?” Roberts’ attorney, dressed in a black skirt and sweater, a black-and-white striped top, black nylons and black pumps, asked Roberts during the scrimmage.

A co-counsel for Cowell, dressed in navy pants, brown flats, a white V-neck top and a black blazer, interjected. “Objection,” she said. And then, “Relevance.”

The scrimmage lasted about two hours.

Afterward, the students and coaches hung around in the classroom and adjacent hallway talking about the case before exiting into the cool evening.

Veronica Navarro, a senior at Clay and a member of the varsity squad, served as co-counsel for Cowell, the plaintiff.

“Our performance tonight wasn’t the best that it could be, but looking back at the past two years, we are much better prepared,” Navarro said. “And honestly, we owe that all to the law students.”

“Henry has just turned our team around,” said Balding, who portrayed Cowell during the scrimmage. 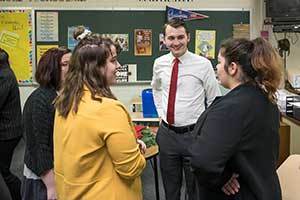 Leaman, who coached his former high school mock trial team during college, and who has helped judge mock trial competitions in the past, gave most of the credit to the students.

In particular, he marveled at their mastery of the rules of evidence, which govern the proof of fact in a legal proceeding.

“We’ve had a lot of moments this year where even the freshmen are like, ‘Oh, Henry, this is like that rule of evidence we covered a couple of weeks ago,’” Leaman said. He noted, “There are law students who don’t remember the rules of evidence we’re covering.”

For Navarro, who hopes to someday attend law school, possibly at Notre Dame, the Law School students have been valuable personally as well.

“They make me feel really comfortable coming to them with questions,” Navarro said.

Leaman also invited the students to tour campus and the Law School, and to learn about the law along the way, the weekend of the Notre Dame-Stanford football game in September.

But the benefits flow both ways.

For the Law School students, the experience is a welcome distraction from the regular routine of Law School, Leaman and Mayfield said, as well as a valuable opportunity to transfer the lessons of the classroom to the (fictional) courtroom.

“You spend so long in law school thinking about things that happened decades ago, names on a page, and being with the students helps remind you how arguments come across, how you compose yourself, and just who you are as a lawyer,” Leaman said.

Added Mayfield, who competed in speech and debate in high school, “In law school you get a lot of theoretical knowledge. But doing mock trial, seeing how a trial unfolds, is really practical. We get to consider a lot of things that we don’t consider in the classroom.”

It also provides an opportunity for the Law School students to venture off campus and into the community — “We barely get out to eat in South Bend, let alone interact with people,” Mayfield said, citing the all-consuming nature of law school — and to pay forward past investments.

About the latter, Leaman said, “I’ve had a lot of lawyers (sacrifice) billable hours to teach me things and really help me become the person I am today. So I get to kind of give back and help these students. And I know from being in their shoes how valuable that is.”

“I couldn’t do it; I don’t have a law degree,” Christopher said. “So for them to give up their time for this, I can’t thank them enough.” 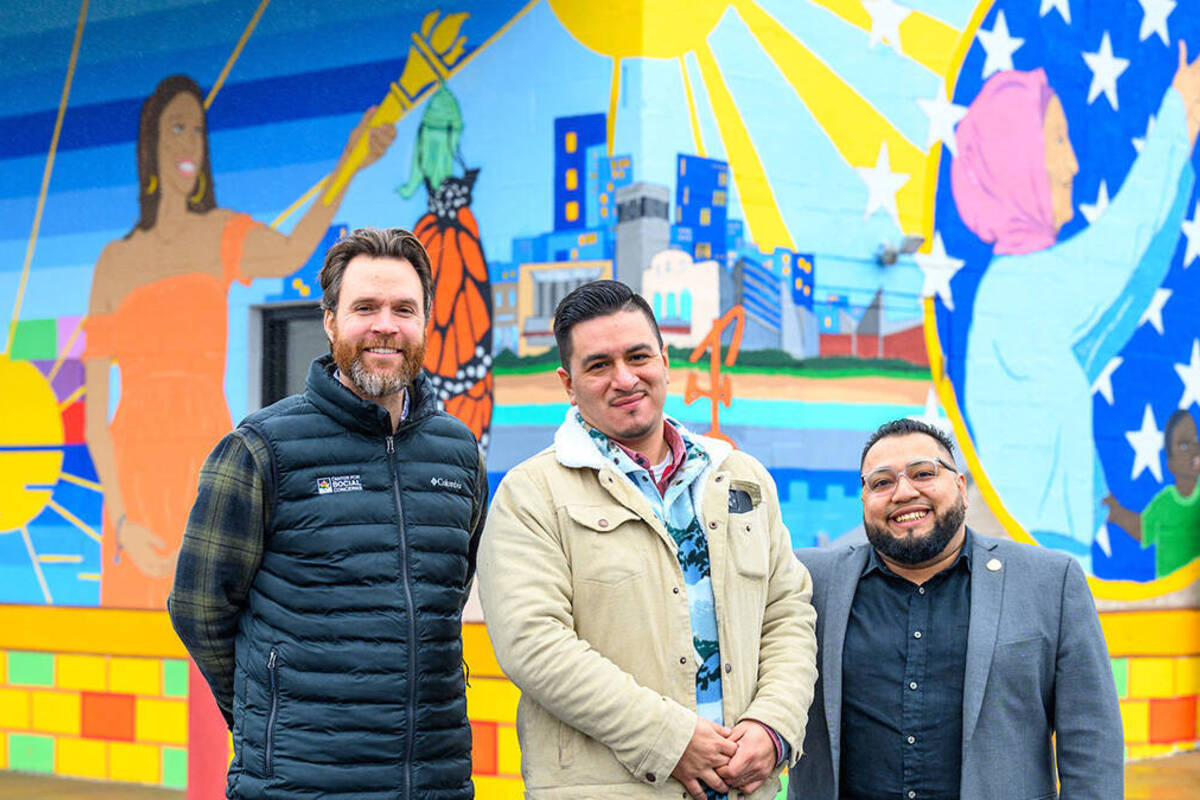 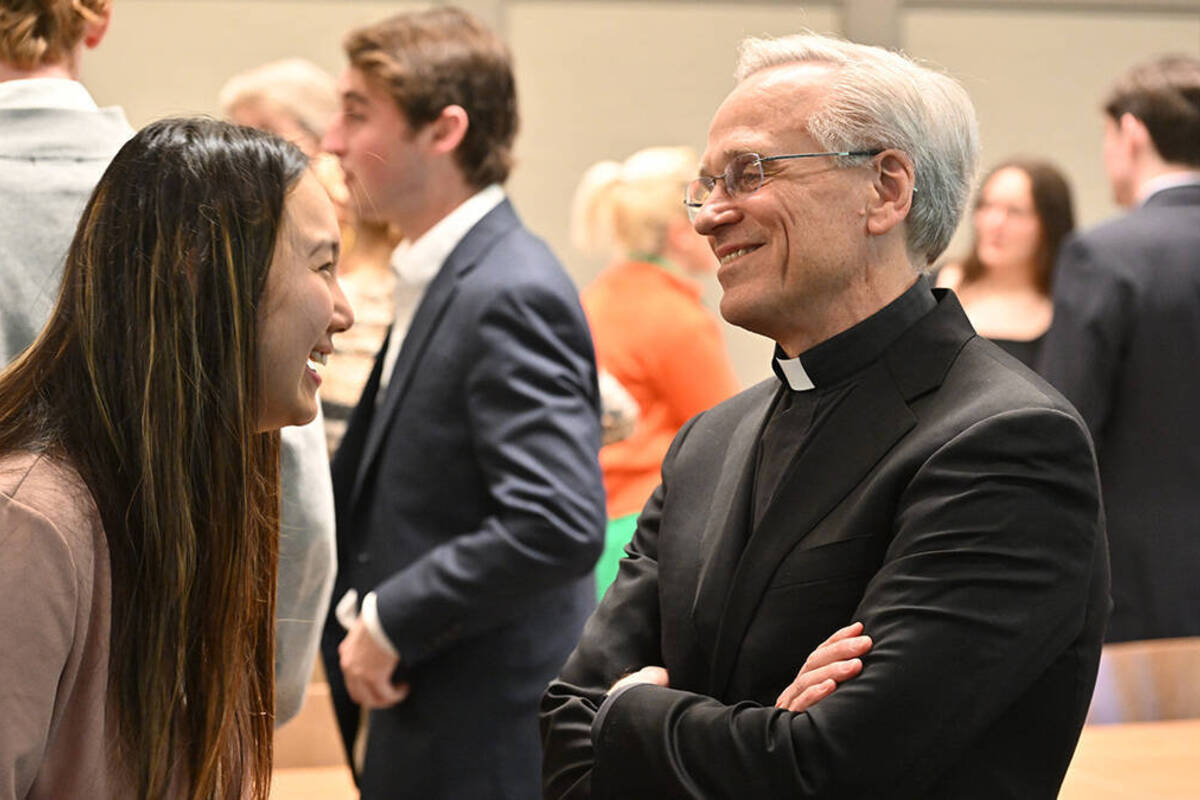