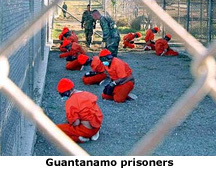 Patricia Bellia, Lilly Endowment Associate Professor of Law; Jimmy Gurulé, professor of law; and Mary Ellen OConnell, Robin and Marion Short Professor of Law will discuss the implications of the June 29 Supreme Court ruling which rejected the Bush administrations argument that Al Qaeda suspects wereunlawful combatantsnot entitled to the protections extended by the Geneva Convention and the Uniform Code of Military Justice.

The decision concerns the case of Salim Ahmed Hamdan, a citizen ofYemenwho served as a driver for Osama bin Laden before being captured during the invasion ofAfghanistanand detained by theUnited Statesat the Guantanamo Bay Naval Base inCuba.

The Hamdan ruling could affect the status of other detainees atGuantanamoand other facilities and could have profound implications for future assertions of executive power.