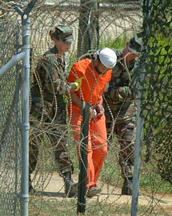 Douglass Cassel, director, and Sean OBrien, assistant director of the Notre Dame Law Schools Center for Civil and Human Rights, have submitted an amicus curiae (friend of the court) brief to the Supreme Court on behalf of 25 former U.S. diplomats who believe that hundreds of detainees in the military prison at Guantanamo Bay, Cuba, are being unlawfully held.

The brief will be included in the courts deliberations this October when it hears oral arguments in the cases of Boumediene vs. Bush and Al Odah vs. U.S.In both, detainees, some who have been held for more than five years, are challenging the Military Commissions Act of 2006 (MCA), congressional legislation which eliminates their legal right to challenge their detention.

According to the former diplomats, appointed by both Republican and Democratic administrations,our professional experience convinces us that American diplomatic credibility and effectiveness in many areas of international relations suffer greatly from the widely shared perception that, by denying prisoners at Guantanamo access to habeas corpus, our country has lost sight of its historic commitment to independent and effective judicial review of the lawfulness of detention.

Some 380 detainees are still being held at the controversial prison in Guantanamo, which was opened by the U.S. government in 2002 to holdenemy combatantscaptured during the war against the Taliban and al-Qaeda fighters in Afghanistan. A full text of the brief may be found at http://www.nd.edu/~cchr/news/Boumediene_amicus_dipl_final8_22_07.pdf