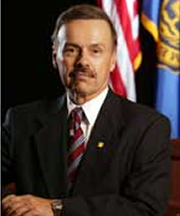 Jimmy Gurulé, professor of law in the University of Notre Dame Law School, will visitMilan,RomeandNaplesthis week to give lectures and lead discussions on global strategies to thwart the financing of terrorism.

Gurulé is an expert in international criminal law and the law on terrorism with a particular interest in terrorist financing and the prevention of money-laundering. Since joining theLawSchoolfaculty in 1989, he has twice taken leaves of absence from the University to work for theUnited Statesgovernment.

From 2001 to 2003, Gurulé served as the Treasury Departments undersecretary for enforcement, helping draft and implement theU.S.governments anti-terrorist financing strategy.He also oversaw the U.S. Secret Service, U.S. Customs Service, Bureau of Alcohol, Tobacco, and Firearms, Financial Crimes Enforcement Network, Office of Foreign Assets Control, and theFederalLawEnforcementTrainingCenter. From 1990 to 1992, he was assistant attorney general in the Justice Departments Office of Justice Programs.

Gurulé has made two similar international journeys this year, speaking on terrorism to European policymakers inBrusselsandViennaand to their Latin American counterparts inParaguay.