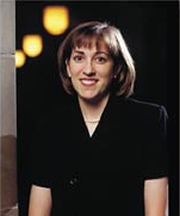 Patricia Bellia, Lilly Endowment Associate Professor of Law in the Notre Dame Law School, will testify before the Senate Judiciary Committee today (Sept. 15) regarding the nomination of Judge John G. Roberts Jr., for chief justice of the Supreme Court.

Bellia, who joined the Notre Dame faculty in 2000, is a former clerk for Associate Justice Sandra Day OConnor.She also has worked in the Office of Legal Counsel of the U.S. Department of Justice, advising justice and other executive branch officials on statutory and constitutional matters, including separation-of-powers and high-tech crime issues.

At Notre Dame, Bellia teaches courses in constitutional law and has written and lectured widely on constitutional issues arising from the use of modern communications technologies Bellia is scheduled to appear before the committee at3 p.m.(South Bend time).