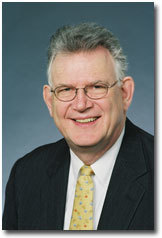 James Seckinger, professor of law at the University of Notre Dame and one of the worlds leading international arbitration instructors, took a leadership role in the creation this month of the Foundation for International Arbitration Advocacy (FIAA) in Geneva, Switzerland. He is one of four founding directors and the only American.

Corporations engaged in cross-border business usually cite several reasons for choosing international arbitrationSeckinger said.They appreciate the flexibility and privacy of the proceedings, the ability to select neutral and skilled arbitrators to decide the dispute, and the ability to enforce arbitral awards in many countries.

Initially, FIAA will focus on providing international arbitration workshops in Geneva, which has a long tradition as one of the worlds leading centers for that form of legal advocacy.
The four FIAA founders are Sheila Block (Torys LLP, Toronto); Gabrielle Kaufmann-Kohler (University of Geneva Faculty of Law); David Roney (Schellenberg Wittmer, Geneva); and Seckinger.

Seckinger has conducted advocacy skills programs throughout the United States, as well as in Canada, New Zealand, Australia, Singapore, Scotland, England, France, El Salvador and Panama. He organized and taught advocacy skills to the war crimes prosecutors for Rwanda in 1996 and for the war crimes prosecutors under the jurisdiction of the special court for Sierra Leone in 2004. He also has trained lawyers and judges in El Salvador and Panama as those countries move to an open court adversarial system of justice.

A member of the Notre Dame faculty since 1974, Seckinger served from 1979 to 1994 as director of the National Institute for Trial Advocacy.