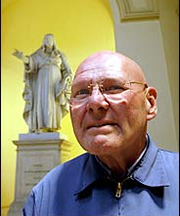 Rev. Reginald Foster, O.C.D., will give a presentation,Is Latin Really Dead? Why the Academy and the Church Should Preserve the Latin Language,at 4:30 p.m. Aug. 24 (Thursday) in Room 120 of the Notre Dame Law School.

One of the worlds foremost experts in Latin language and literature, Father Foster, a priest of the Carmelite order, works in the Latin Letters section of the Vaticans Secretariat of State and is the principal Latin scholar for Pope Benedict XVI.For the last 25 years he has taught a free summer course, “Aestiva Romae Latinitas” (Summer Latin in Rome), requiring his students to bring a knowledge of Latin, a love of the language, and the will to learn more.

During the summer, Father Foster also leads summer tours of Pompeii and the Roman Forum.Several American universities have modeled their Latin programs after Father Foster’s unique teaching manner which, according to one former studentis characterized by a gruff style that feigns anger, disappointment, and a sense of despair for the future of Latin studies. Yet most students see that the demeanor is merely part of his style, and consider his tough loveapproach a refreshing contrast to the coddling of undergraduate American curricula.