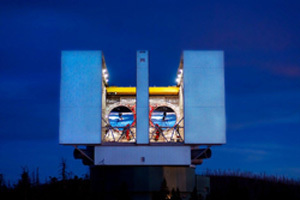 With its capability, the LBT is the largest single telescope in the world. Located in southeastern Arizona, the $120 million LBT is the first of a new generation of extraordinarily large optical telescopes. It uses two massive 8.4-meter (27.6-foot) diameter primary mirrors mounted side-by-side to produce the light gathering power equivalent to an 11.8-meter (39-foot) circular aperture. The mirrors, which are lighter in weight than conventional solid-glass mirrors due to their unique honeycomb structure, work in tandem.

Notre Dame astronomers Peter Garnavich, Chris Howk and Terry Rettig have played leading roles as scientific investigators with this unique facility. Garnavich, a professor of physics, utilizes the LBT to investigate the nature of dark energy and dark matter. He uses exploding stars to map the expansion history of the universe. The large light collection area of the LBT allows him to detect supernova explosions more than half way back to the Big Bang.

Howk, an assistant professor of physics, uses the LBT to study the evolution of galaxies over cosmic time, notably their interactions with their surroundings. He uses the unique wide-field imaging capabilities of the LBT to study both how galaxies gather in gas from the gaseous filaments within which they reside and how they lose gas to these filaments due to the effects of internal supernova explosions. This work will allow us to understand the growth of galaxies with time as the universe evolves. Howk says that the collecting power of the LBT and its wide-field of view allow us to study the growth of galaxies from a time when the universe was half its current age through today. Thus, we can understand the construction plan of typical galaxies.

Rettig, a professor of physics, is using the high resolution provided by the LBT to study the origin of planets forming around young stars. As a young star forms, some of the collapsing cloud of gas and dust is left behind to form a rotating disk of material that may eventually produce a planetary system. The high resolution images and spectra of the LBT allows him to study the physics of how this gas and dust can coalesce to form disks and potentially planetary systems, a process that is very similar to how the solar system formed some 4 billion years ago. 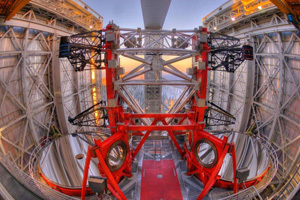 Notre Dame owns a share of the facility through the Research Corp., along with the University of Minnesota and the University of Virginia. Several astronomy and academic institutions in the U.S., Italy and Germany also own shares of the collaborative facility.

Notre Dame is honored to host the annual board of directors meeting which will begin on March 27 (Sunday). The board of directors is composed of two representatives from each of the major partners—University of Arizona, The Ohio State University, Research Corp., Germany and Italy. Peter Stritmatter, the Regents Professor of Astronomy at the University of Arizona, serves as the board president.