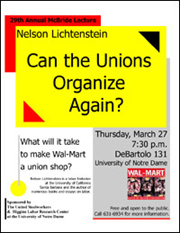 Nelson Lichtenstein, a pre-eminent historian of American labor from the University of California, Santa Barbara (UCSB), will deliver a lecture titledCan the Unions Organize Again? What Will it Take to Make Wal-Mart a Union Shop?at 7:30 p.m. March 27 (Thursday) in 131 DeBartolo Hall at the University of Notre Dame.

Sponsored by Notre Dames Higgins Labor Research Center as part of the McBride Lecture series, the talk is free and open to the public.

A professor of history, Lichtenstein specializes in 20th century U.S. labor history and directs the Center for the Study of Work, Labor and Democracy at UCSB.He is the editor ofWal-Mart: The Face of Twenty-First-Century Capitalismand currently is working on a history of the worlds largest corporation, explaining how transformations in the technology and structure of the retail sector have enabled big merchants to assume a commanding role in the production as well as the distribution of the worlds goods.